StoryCorps: “I found a voice…” 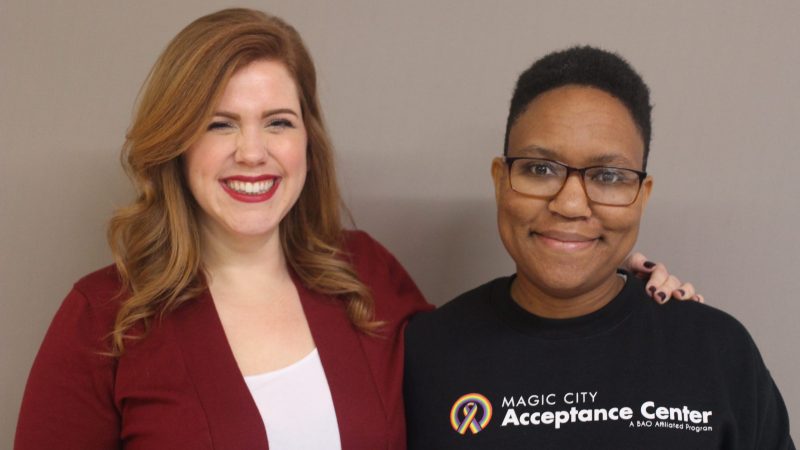 StoryCorps is an oral history project that records the life stories of people from all backgrounds and beliefs. Each year the StoryCorps MobileBooth visits cities and towns across the country to record the stories of the people who live there. They came to Birmingham in 2019.

Amanda Keller and Lauren Jacobs work together at Birmingham’s Magic City Acceptance Center. In addition to being co-workers, they are also close friends. They came to the StoryCorps MobileBooth to talk about Amanda’s relationship with her late father and its influence on her work.

Amanda Keller (AK): He cooked. He had elaborate dinner parties. I had so many uncles who I could never quite understand their relationship to our family. I had an incredibly interesting childhood until I was 17 and I was sat down and I was told… My dad was incredibly sick, and my parents told me he was HIV positive and he had been so for over 10 years and was dying and was given six months to live. And so, as a teenager, my entire life changed. I learned that my father had identified as bi and so I spent the last six months of his life getting to know my dad authentically.

Lauren Jacobs (LJ): Did you have any sense of yourself as queer when you found out that your dad was gay?

AK: My favorite thing to tell people is that I’m the founding director of Alabama’s, or Birmingham’s first and only LGBTQ youth center, which I happened to be the director of for a solid two to three years before anyone had any idea I identified as LGBTQ or part of the community. That’s been the most interesting challenge of my life – is being viewed as straight and regularly being called straight because of my, my presentation. So that has been frustrating for me because I exist in spaces and it is assumed that my existence in that space is work-related and not because I could possibly identify as a member of the community.

AK: I’m super feminine. I’m very girly. I love lipstick and makeup and heels and dresses and so I am often a victim of femme presentation in which I just don’t look visibly queer.

LJ: You put into conflict for me like two very opposing ideas: one, that nobody ever owes anybody their out-ness and two, that LGBTQ people should run LGBTQ things. And I had never thought about those things being in conflict with one another until you. And then I was like, whatever, she does good work. We’ll figure it out.

LJ: What do you think your dad would think of what you do?

AK: As a theater director, his big saying to me was always, “Sing out Louise!” I was very quiet when I was little. I liked to be in the background. I don’t think he thought I had a voice and because I lost him, I found a voice. And so seeing me do the work that I do and speak at community events and stand on a stage with fifteen hundred people and emcee LGBTQ events, I think he would be so proud and so shocked. And it makes me sad because I think we would have the best relationship and so many incredible conversations and I hate that he’s not here to talk about that with.