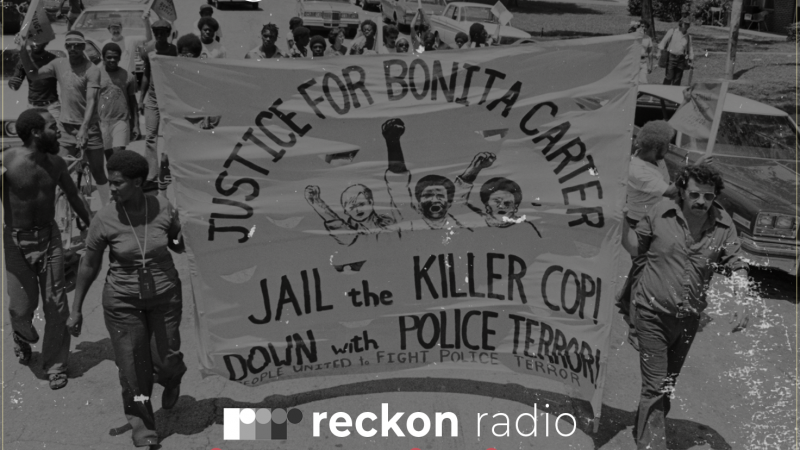 In 1979, a Birmingham police officer shot and killed Bonita Carter, a 20-year-old Black woman, outside of a convenience store. A citizen review panel declared the shooting justified, but Birmingham’s Black community was outraged. Bonita Carter’s death sparked street protests that ultimately led to the election of Birmingham’s first Black mayor.

A new podcast called Unjustifiable from Reckon Radio dives into this story that changed the course of Civil Rights history in the south.

It’s hosted by Pulitzer Prize-winning columnist John Archibald, who was a high school student at the time Carter was killed.

“I remember there was a shooting and the way it was always told to me or the way I processed it was that Bonita Carter was with a friend of hers and they went to the store,” Archibald told WBHM’s Andrew Yeager.

“And there’s debate over whether she knew what was going on but he went in and the way my faulty memory told it was he tried to rob the store and she was shot while sitting in the car. But that’s not the way it happened.”

You note right as you start this podcast, that not just your own memory, but much of the white community remembers this a certain way. And that’s not how it is in the Black community. What are the differences?

I think in a lot of ways it is a myth passed down in much of the white community that attempts to rationalize this, that attempts to say what you must have been doing something wrong. I think the more in the Black community we see that people see this as a symptom of the system that white people had set up over the course of time, which, as we will see in the podcast, resulted in the deaths of hundreds of Black people, mostly Black men, at the hands of police over the decades preceding this.

In terms of those systemic issues, black people are disproportionately killed in interactions with police and that goes back decades. Why Bonita Carter, why did that create such a reaction in Birmingham?

To step back a little bit, in the three decades leading up to the Bonita Carter killing, we can find now that there were 213 shot by police in Birmingham at that time. Two hundred of those were Black. It’s a staggering number.

And the fact that it was rare for a woman to be killed, it was widely seen in the community that she had done nothing wrong, that the officer took a white man’s word and simply opened fire on her because it was the way things were done.

Time after time, Black civic leaders, Black religious leaders came before the city and said, look, you’re killing Black people at alarming rates, you’ve got to do something about it. And it just never happened.

We see this pattern more generally that a Black person is killed by police. The death is ruled justifiable, or if not, there are minimal charges brought. Police officers are rarely convicted. So you have activists on one side saying the system is broken and harmful to Black people. You have police officers that say their jobs are tough and sometimes dangerous. They have to make split second decisions. In this project, did you find any way out of that pattern?

Not really. First of all, a police officer’s job is tough. I mean, it is very hard. But what we see in looking back over these hundreds of police shootings is that, yes, the law was to shoot fleeing felons. In practice, white people did not get shot. White people got a benefit of the doubt.

All these events happened more than 40 years ago. What do we take from the Bonita Carter case today?