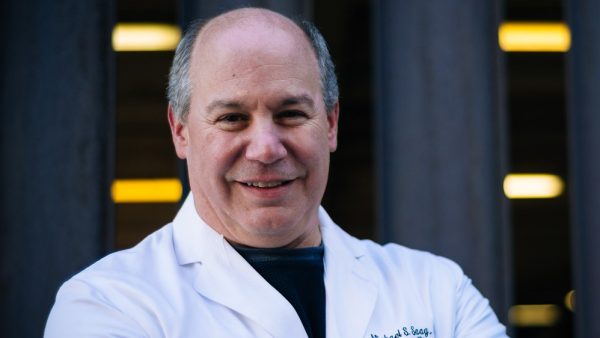 Dr. Michael Saag knows a thing or two about infectious diseases. He’s director of the Center for AIDS Research at the University of Alabama at Birmingham. Right now, though, he’s a patient. Saag announced Tuesday that he’s tested positive for coronavirus.  He says he made his diagnosis public in an effort to raise awareness.

Saag says so far his symptoms haven’t been too bad. Most have been mild-to-moderate symptoms such as fever or cough. But at age 64, Saag is at higher risk. Older adults and those with other health problems can become seriously ill.

He may have been infected while traveling to Boston and New York recently.

“But the point is I don’t know [that] for a fact,” Saag says. “This virus is so pervasive right now in the United States, including Alabama, that we can’t know where the majority of people picked up their infection.”

Saag says he was being vigilant by practicing social distancing, wiping down surfaces, washing his hands frequently and trying not to touch his face, but the coronavirus is so contagious he caught it anyway.

“Stay at home! Do not go out unless it’s essential,” Saag says.

That means only quick trips to get groceries or medicine.

“Cancel your card game. Cancel your mahjong. Cancel any of your usual appointments, if they’re not essential,” Saag says.

Saag wrote a column last week using projections of the virus’ spread to show how it could overwhelm the healthcare system. He says his views haven’t changed.

“If anything, I’m more concerned,” Saag says. “Partly because, despite my efforts at social distancing, I became infected.”

He believes the projections that show 70 to 120 million Americans will become infected. An estimated 20% of those, mostly older people, will need additional medical care. At the low end, that’s 14 million people who could require hospitalization.

“That’s going to swamp our medical system to a degree that it becomes destabilized,” Saag says. “So what can we do? Stay at home!”

A hint of that is happening already as testing sites are deluged with people wanting to be tested for COVID-19. Saag says he understands people are concerned, but right now testing should be reserved for those with symptoms.

Saag spent his career studying AIDS. While it’s a different disease, he does see lessons from the 1980s, when AIDS entered the public consciousness. Both coronavirus and AIDS seemed to appear out of nowhere driving fear and misinformation. He says those diagnosed with AIDS were stigmatized. That’s less so with coronavirus. Saag adds there was huge value with people “going public” with their AIDS diagnoses.

“Which is a huge reason why I immediately put my name out there as someone who was infected,” Saag says.

Science is helpful, he says, and some of what’s been learned from the AIDS epidemic has been applied to studying coronavirus. But the timeframe is completely different.

“We had two decades in AIDS. We have a few weeks in COVID-19,” Saag says. “We have no substitute for time and we’re going to need time to figure more of this out. In the meantime people need to hunker down and protect themselves.”