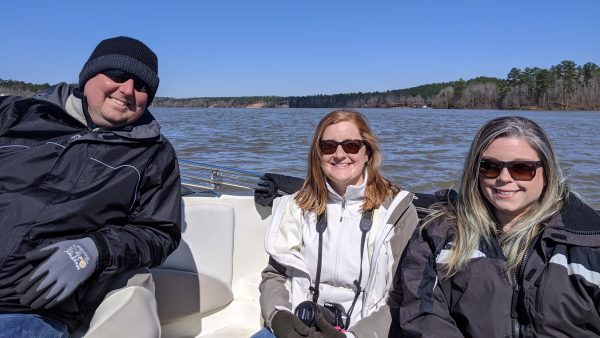 On a recent chilly morning, Shelby county residents Emily Dooley and Bill and Heather Tinsley load into a boat along the banks of Lay Lake near Columbiana. Bill cranks the engine and heads a few miles down stream.

“So that’s Talladega over there,” Bill Tinsley says, pointing across the lake. “Shelby’s over here.”

Developers are proposing to build a toll bridge at this location, to cross the lake and connect the two counties. The idea is to link Highway 280 in Sylacauga to Highway 65 in Calera. Developers estimate the new route, which would cost $2 each way, would shave off 12 minutes drive time.  They say the project will cost between $30 and $40 million.

The proposed bridge route for the Coosa River Express.

Sitting in the boat in the middle of Lay Lake, Dooley says she’s against it.

“I cannot imagine there being a bridge right here, like I can’t picture it,” she says.

“If you spend any time on lakes in Alabama, you might notice this is one of the lesser developed lakes,” she says.  “You get to see beautiful tree lines and scenery and birds. I mean, traffic is definitely going to disturb that.”

The bridge, called the Coosa River Express, would be privately financed, but it requires approval from both counties. Talladega officials approved it in January. The Shelby County Commission will vote on the proposal March 23.

Tim James Jr., one of the developers, says the bridge will be good for Shelby County.

“When you create a corridor like this, growth tends to follow,” James says. “Our project goes directly through the part of the county that needs a shot in the arm, so to speak, and that’s something we’re excited about.”

Kevin Morris is the Shelby County Commissioner for District 1, where the bridge would be built. He says the commission needs more information about what kind of development might come from the project.

“We’re constantly looking for ways to grow our county, but in a very controlled, designed way to be able to take on that growth,” Morris says.

Developers say they plan to present an economic impact study to the county before the vote. They estimate about 5,000 vehicles will cross the bridge daily, and about 500 of those would be large trucks.

Some residents don’t want that extra traffic in the area. Dooley and her family live on a quiet farm near the proposed site.

“I can’t pick up the forty acres I live on and move them, like that’s not an option,” Dooley says. “My kids are the fourth generation living on this.”

Dooley is one of hundreds of residents who have shown up to recent county commission meetings to discuss the bridge. Some are worried about how extra traffic would impact county roads, which can be curvy and narrow. There are also concerns about whether local volunteer fire departments could keep up with added demand. And then there are the potential impacts to the lake itself.

“One of the major concerns that we have is obviously the environmental concerns surrounding the construction of the bridge,” says Justinn Overton, executive director of the Coosa Riverkeeper.

She says Lay Lake, which is on the Coosa River, is known to have dangerous pollutants called PCBs which could be stirred up during construction. Overton says construction will also increase sedimentation and turbidity levels in the water.

Developers say they are aware of these concerns. As part of the bridge project, they say they would help fund local fire departments and pay to widen and resurface county roads.

Juanita Black says it’s a good deal for Shelby County. Black is the short order cook at the Shelby Sandwich Shop, a small grab-and-go shack that sits along the proposed bridge route. She says the bridge could improve business.

The lead developer Tim James, son of former Alabama Governor Fob James, has built toll bridges before. About 20 years ago, his company financed the Foley Beach Express, a private toll bridge in South Alabama. After it was built, James sold the bridge and the company that eventually bought it filed for bankruptcy after traffic numbers failed to meet projections. James says this time around, he has no plans to sell the Coosa River Express, if it’s built.