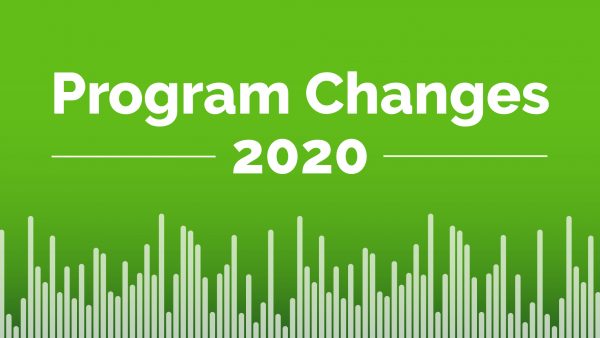 It’s Been a Minute with Sam Sanders, Sound Opinions, Bluegrass Breakdown, Highway 61, Ask Me Another, The Splendid Table, Travel with Rick Steves, and On Being are scheduled for weekends, and weeknights will now include Marketplace.

In addition, classical music will begin at 8 p.m. on weekdays and at 10 p.m. on Saturdays, and the rebroadcast of Fresh Air, which currently airs Monday through Thursday 7-8 p.m., will now include Fridays.

“From business to bluegrass to brunch, these nine new shows bring a variety of interesting new sounds and new voices to the heart of Alabama,” says Michael Krall, WBHM’s program director.

The impetus for WBHM’s programming change came with the announcement that PRX, a program distributor, is canceling Studio 360 after 20 years of production. The show’s archive will remain online, according to PRX, and the final episode will air Saturday, February 29, at 1 p.m. and again Sunday, March 1, at noon.

The station will also no longer broadcast jazz in the evenings. Jazz enthusiasts are encouraged to listen to WAJH, formerly WVSU-FM from Samford University, which is now Birmingham’s only dedicated jazz-exclusive radio station. Acquired by The Alabama Jazz Hall of Fame in 2018, WAJH plays both classic recordings and new releases, with a focus on Alabama artists.

“We are continually evaluating our schedule and listening to new program offerings,” says Krall. “But with the space left by Studio 360, we had an opportunity to move a few shows around and feature some programs our listeners have been requesting.”

Marketplace (weekdays from 6 – 6:30 p.m.) is public radio’s daily magazine on business and economics news “for the rest of us.” The 30-minute program — with an irreverent reporting style all its own — boasts the largest audience for any business program in the United States on radio, cable, or network television. In conjunction with Marketplace Morning Report, this package of financial programming covers listeners from wallet to Wall Street.

Sound Opinions (Saturday 5 – 6 p.m.) is where people who love music can come together. You can make discoveries, debate, learn about pop culture, engage, have fun, and find new ways to further enrich your lives through music. Whether you’re an expert, or just a casual fan, Sound Opinions is your source for smart and engaging music criticism and conversation. Each week on the show, nationally respected rock critics Greg Kot and Jim DeRogatis interview artists, talk about pop culture and music industry news, review new record releases, and give trends a historical context. And, because on Sound Opinions,“everyone’s a critic,” listeners are invited to join in the debate.

Bluegrass Breakdown (Saturday from 8 – 9 p.m.), is … well … maybe we’d better let them describe themselves. Produced by WPLN in Nashville and hosted by Dave Higgs, the show is “an emotionally-charged, heart-rending, paint-peeling, splinter-kicking one-hour bluegrass show. Thematically, we’re all over the bluegrassical map, boldly covering such hot topics as broken things in Bluegrassland, gospel train songs, and ‘ain’t’ tunes. We also make frequent trips to the seldom seen new bluegrass CD bins, where the latest discs in bluegrassdom are examined.”

Highway 61 (Saturday from 9 – 10 p.m.) is an award-winning, one-hour blues program from Mississippi Public Broadcasting hosted by Scott Baretta at the Center for the Study of Southern Culture at Ole Miss. Baretta is a writer and researcher for the Mississippi Blues Trail, former editor of Living Blues magazine and author of Mississippi: State of the Blues. Each week, Highway 61 delivers the best in blues music and culture: past, present and future.

If you are exhausted by the news but can’t seem to focus on anything else, this weekly show with former NPR political reporter Sam Sanders will help. It’s Been a Minute (Saturday and Sunday 9 – 10 a.m.) is an irreverent, casual space to process the pace of current events and get introduced to new favorites in music, TV, and more. It’s a wrap of the week paired with deep dive interviews with musicians, actors, and newsmakers. As Sam says,”The world is complicated; let’s talk it out.”

Ask Me Another (Sunday 11 a.m. – noon) brings the lively spirit and healthy competition of your favorite trivia night right to your ears. With a rotating cast of funny people, puzzle writers, and VIP guests, it features the wit of host Ophira Eisenberg, the music of house musician Jonathan Coulton, and rambunctious trivia games, all played in front of a live audience.

The Splendid Table (Sunday noon – 1 p.m.), is hosted by award-winning food writer Francis Lam. A culinary, culture and lifestyle program, it has hosted our nation’s conversations about cooking, sustainability and food culture and has introduced us to generations of food dignitaries. With Francis, you can expect a modern, multicultural weekly snapshot of the food world — exploring different cultures, cuisines, and ideas, as well as the small personal stories that come out of the expansive world of the table. As a former restaurant cook and culinary school graduate, Francis can handle virtually any food query and loves taking listener’s calls. He is keenly interested in people and their stories and believes that one of the keys to understanding people better is to learn what they cook and how they eat. The Splendid Table frequently visits with the test cooks at America’s Test Kitchen to discuss a wide range of topics including recipes, ingredients, techniques and kitchen equipment.

On Being (Sunday 6 – 7 p.m.) is the only program in American media dedicated to the large questions at the center of human existence and how these questions of meaning find practical resonance in our lives. Each week the show takes up the big questions with scientists and theologians, artists and teachers — some you know and others you’ll love to meet. Host/executive producer Krista Tippett was awarded the 2013 National Humanities Medal by President Obama for “thoughtfully delving into the mysteries of human existence.”