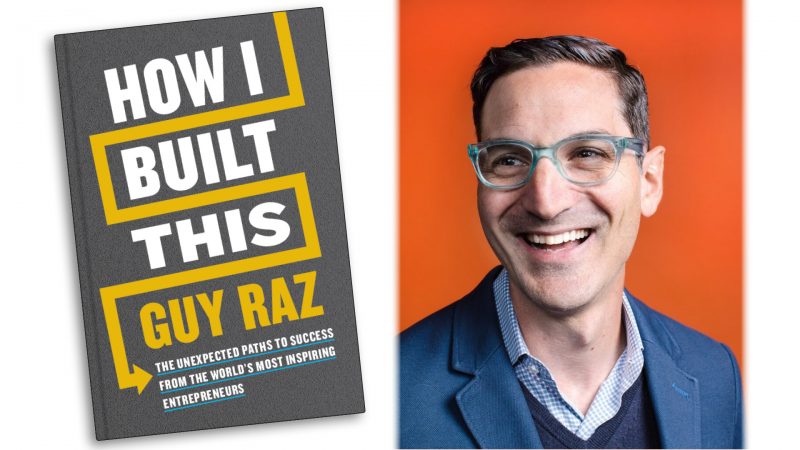 Imagine this. You’re an NPR host with accolades for years of overseas reporting. You set that aside to develop podcasts, an emerging, untested, under-the-radar form of media. That’s what happened to NPR’s Guy Raz when he left Weekend All Things Considered in 2012.

Since then, Raz has created five podcasts and a business to support them, including “How I Built This.” In it, Raz interviewed entrepreneurs about the struggles and successes that led them to where they are today. This month, he released the book “How I Built This” based on the podcast. Tuesday he’ll take part in a virtual book event sponsored by Birmingham-based Books-A-Million.

Raz said he’s always had an entrepreneurial “itch” so this change in career was perhaps not surprising. Part of that comes from his parents, who left stable careers to open a jewelry store. Plus, practicing journalism and building a business have some things in common.

“To be a reporter requires all kinds of entrepreneurial skills and experiences like constant failure,” Raz said. “Being a reporter means knocking on doors and hearing people say, ‘no, I don’t want to talk to you. I’m not interested.”

It took ingenuity, in Raz’s case as a reporter, to fly into eastern Turkey, hire a driver and interpreter, find people to interview, and quickly put a story on the air. To him, there’s little difference between the work he did in a newsroom and the work he does now as a podcast host. He wants to find personal stories.

“We learn from people’s experiences, from their narratives, from their journeys, their triumphs and their failures,” Raz said. “The moments when they’re lying on the bathroom floor crying in the fetal position, that’s when we learn about how to conduct our own lives.”

Business leaders often have carefully crafted public images, but Raz often drew out difficult moments from his interviewees. Guests on “How I Built This” must agree to no preconditions meaning virtually everything is fair game. He also looked for ways to connect.

“When you can figure out how to connect with somebody quickly, they are naturally more willing to open up and tell you about the things in their lives that they’re not always comfortable doing,” Raz said.

Raz has interviewed hundreds of business leaders. About half are women or people of color. He said most investment money still goes to white and Asian men, although funders increasingly seek out entrepreneurs who haven’t historically had a seat at the table.

The biggest challenge now is the coronavirus pandemic. Raz said businesses are having to make radical changes, taking “huge swings” to build resilience within their organizations. The pandemic accelerated change, too.

“Founders and business leaders are taking risks that would have taken them 18 months to two years to implement and they’re implementing these changes now in just a matter of weeks,” Raz said.

For all the celebration of entrepreneurship, there’s arguably a downside. Walmart or Starbucks represent success stories, but sometimes at the expense of a mom-and-pop shops that can’t survive. Raz said there’s some truth to that, but there’s another way to look at it. In the case of Starbucks, the coffee chain popularized coffee consumption, greatly expanding the market for the drink.

Businesses and podcasters have plenty of numbers to tout their successes, whether that’s through earnings or downloads, but for Guy Raz, success comes in a low-key way, if a bit cliché, as he puts it: his role as a father and a husband.

“I’m more interested in having a personally fulfilled life and a strong relationship with my family,” Raz said. “That’s pretty much my only measure.”