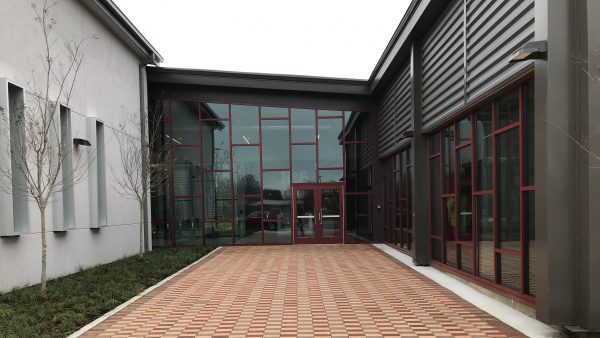 Drive along Third Avenue North in Downtown Birmingham most evenings and you might see men lining the street outside a two-story brick building. The non-profit Firehouse Ministries has provided housing for homeless men for almost 40 years. Thursday afternoon, staff and supporters of the shelter cut the ribbon on a long-awaited new facility.

Executive director Anne Rygiel can hardly contain her excitement, which is understandable given the condition of the current building.

“No exaggeration to say that it is crumbling in around itself,” Rygiel says.

When it rains, the building leaks. It is a former functioning firehouse and only has a capacity of 50 beds. To decide who stays each night, staff uses a deck of cards.

“If you draw a red card you get to spend the night,” Rygiel says. “And if you draw a black card you have to sleep out on the street because we just don’t have enough room.”

That changes with the new building, just west of downtown.

Behind the front desk is a brick wall and the shelter’s old sign, a nod to the former building.

Rygiel says Firehouse leaders started working toward a new facility in 1996. It took overcoming “not in my backyard” issues and raising $6 million.

The new facility is built around a central courtyard and with large windows, much of the space is bathed in natural light. There are lockers so those who are homeless don’t have to lug around bags or risk losing valuable documents. It holds twice as many beds as before with 10% reserved for veterans.

Rygiel says the building is intended to offer dignity to people who are often stigmatized and pushed aside. That thinking extends to the bathrooms. She says she took a tour of the new building with some men who are staying at the shelter.

“They held it together pretty good through the housing but when they got in these showers two of them started crying,” Rygiel says.

They cried because the shelter offers individual shower stalls. Privacy can be a luxury.

Apart from amenities, the new building allows Firehouse Ministries to tailor its help to specific groups. There’s space with 24-hour access for those who are working. There’s respite care for those who need to recover after a hospital stay. It has youth housing for those 18 to 24-year-olds.

A central courtyard allows those staying at the shelter a measure of privacy in an outdoor setting.

Recovering drug addict and alcoholic John Hanley is 35-years-old and spent much of his adult life in a revolving door of treatment centers. He came to the Firehouse Shelter three weeks ago and even in that short time he sees a difference.

“When I walked in here and looked at the size of this building, I mean, the dining room alone is amazing, the cleanliness,” Hanley says. “A lot of love and compassion went into the construction of this building.”

Eunrekea Harris connected with the shelter eight years ago after losing his job and struggling with drug addiction. Harris praises the Firehouse’s support, such as help in finding a job. He says updated space strengthens the support system.

“That’s the big difference in the new Firehouse from the old Firehouse. Not to say that they didn’t have that but right now it’s more advanced in any kind of way,” he says.

Harris says after 40 years of what he calls “being lost,” he still dreams of owning his own business. He’s working toward starting a lawn care company.

A new home for the Firehouse Shelter was a dream for more than two decades. Now that it’s here, it could help turn more dreams into reality for those who walk through its doors.