Birmingham Theaters Take To The Stage Despite A Pandemic 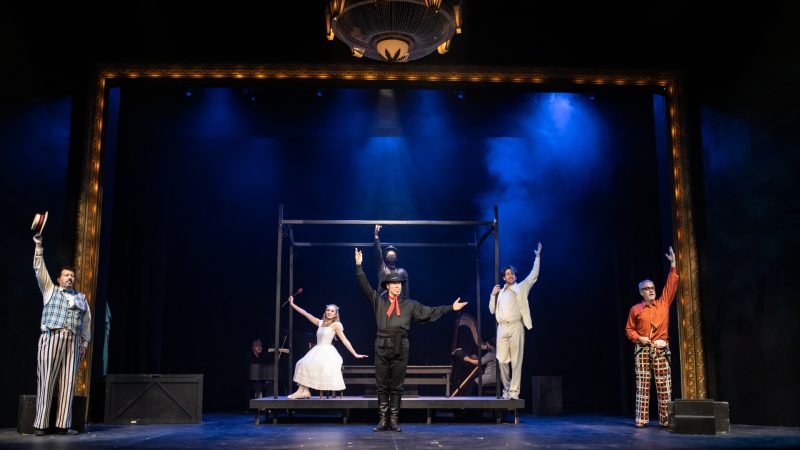 The Virginia Samford Theatre staged a socially distanced production of "The Fantasticks" in October 2020.

Those involved in theater sometimes take on multiple roles. For James Lebo that means not just serving as the Virginia Samford Theatre’s costume designer, but also their temperature bouncer.

Lebo stood in front of the theater’s glass doors at a recent matinee and stuck a thermometer to each audience member’s forehead as they approached the building. He struck a lighthearted tone with a procedure that’s become ubiquitous during the coronavirus pandemic, asking a bald man to pull back his bangs and telling another his temperature registered 312 degrees.

“Everyone has worn masks, haven’t had any issue with that, and everyone has temped out just fine,” Lebo said.

It’s one example of how Birmingham theater groups have adapted to a world of COVID-19. Live theater is particularly challenging since performers and the audience are generally in close quarters with no social distancing. But companies are finding way to forge ahead both on and off the stage.

“As If We Never Said Goodbye”

Virginia Samford Theatre implemented many safety procedures in order to hold performances inside its building. In addition to masking and temperature checks, the audience is limited to just 100 people – a third of capacity. Patrons are directed to their seats to reduce congregating.

The actors also have temperature checks and they’re masked when they’re not on stage. For a run of “The Fantasticks” in October, the director redesigned the show so the performers would be distanced. Not every production can handle that treatment.

“That’s kind of the path that we’re on right now is choosing very carefully shows that we feel that our audiences will like but we can manage it back stage and on stage,” VST President Cathy Gilmore said.

For Red Mountain Theatre Company, the pandemic meant a change of venue from its intimate cabaret theater to outdoors where people can spread out. The group staged a collection of monologues and music at the Avondale Park amphitheater in September. Their Holiday Spectacular in December will be at a place not known for theater: the baseball stadium Regions Field.

“I’m putting a 40-foot by 28-foot stage across home plate and we are going to socially distance the audience,” RMTC Executive Director Keith Cromwell said. ”I am just going to go nuts with this.”

Performers will be masked because of proximity to each other on stage which means, other than solos, songs will be prerecorded. But the change in venue also presents an opportunity.

“I’m going to have fireworks. It’s going to snow over the audience. I’m going to have live animals,” Cromwell said. “Frankly, I’m thinking COVID or no COVID, we may end up wanting to do this every year.”

The online videos were recorded in one take to be as much like live theater as possible. More recently the group has streamed live, one-person shows, though the virtual format can lack the connection between actor and audience.

“A lot of what we do in theater for youth is there’s a lot of letting a kid be involved in the production, even if it’s just talking back to the audience or letting them really be mad at a villain or really clap for a hero,” BCT performer Rebecca Yeager said.

The pressure on theaters goes beyond how to stage shows to how to weather the financial turmoil brought on by the pandemic. All three companies received Paycheck Protection Program loans. They are also nonprofits, so they rely on donations, not just ticket sales like a commercial theater.

The leaders of Virginia Samford Theatre and Red Mountain Theatre Company said their finances were in good shape going into the pandemic. VST did not layoff any staff. RMTC did have to furlough some, but about 90% have been brought back. The company is still on track to open a new $25M arts campus near Railroad Park in June.

But it has been a difficult road for Birmingham Children’s Theatre. It is still operating with a skeleton staff since almost half of its revenue comes from school field trips, which aren’t a priority in a pandemic.

“We are always connected to the schools and when they struggle, we struggle. When they thrive, we thrive,” BCT Interim Executive Artistic Director Ashley Woods said.

According to Dominic Yeager, associate chair of the University of Alabama theatre department and head of the arts management program, holding shows at reduced capacity is not sustainable long-term. He cautioned that nonprofits should avoid relying too much on donors.

“We don’t want to tap out that funding too soon, because we’re definitely going to need it to try to make the climb back up to more normal operations,” Yeager said.

Theater must rebound, he argued, because of its artistic role in the community: to comment on what’s going on around us.

What bigger subject to comment about than a pandemic?

Andrew Yeager, Rebecca Yeager and Dominic Yeager are not related.