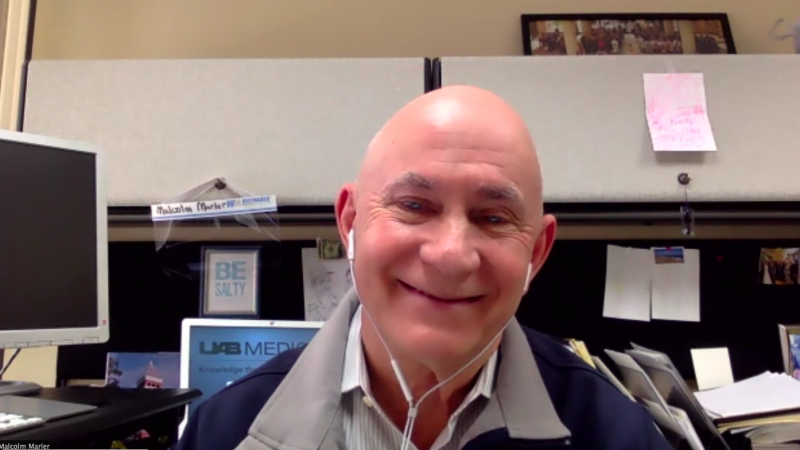 Back in April, we spoke with the leader of UAB’s Pastoral Care team, Malcolm Marler. At the time, he and his team of chaplains were spending most of their time counseling health care workers on the frontlines of the COVID-19 response. But now, Marler said they’re also connecting families who can’t visit loved ones in the hospital.

“I got a phone call and the woman said her mother was in the hospital and has some dementia, and this family member was just saying, I can’t describe to you how hard it is to not be able to be with my mother during this time,” Marler said. “And I promised her, I will go see her and I did. Her mom was not really following my conversation while I was there.” Marler asked the sick woman, “would it be okay if I had a prayer with you?” He said this is someone who up until this point had really not responded very well. “She looked straight at me and said, yes, thank you. It was like there was this moment of connection,” he said. “I came back to my office and called her daughter and just said, I want you to know about a connection we had. And that was encouraging to her to share with her siblings and anything that we can share that helps them be in the room that’s helpful to them.”

The last time we spoke, you said the hardest part of your job was not being able to touch people and comfort them.  How have you been able to comfort hospital staff and their patients these days?

“We normally would want to hold a patient’s hand or touch them gently on the shoulder. But now, I use something I learned from a friend in the community. His name is Joe Elmore. He’s a retired Methodist minister. And I was visiting with him one day on his carport. And he looked at me and he put his hand over his heart and he said, Malcolm, I want you to know that I am holding you in my heart. And when he said that, I thought that is so different and special in that he was holding his hand over his heart. And it sounds like a little thing, but it’s like instead of shaking hands with people now, I put my hand over my heart and I say, I just want you to know that you are in my heart, which is just another way of saying I want to be connected to you and I want you to know I’m thinking about you and praying for you. And so there are things like that. We’re learning to use our hands in different ways.”

This pandemic has gone on longer than either of us have expected. What keeps you going?

“This is what I’m called to do. This is my purpose, to respond when people are in need. But because this is what I’m called to do, it’s both inspiring, it gives me energy. I’m anxious to get back and it’s hard to leave each day. I know that a lot of us are working too hard or too long. It’s something we wouldn’t probably recommend to most people. But it’s just part of what we’re trained to do. And for me, in a more theological way, it’s what God called me to do — to be with people and have them know they’re loved and not alone no matter what they are going through. And I think more than anything, what we need in the pandemic is connection because we feel disconnected from people that we normally took for granted. So finding ways to connect helps me survive. If I can express genuine care and concern for a colleague and I talk about that for a few minutes or vice versa. That’s how I’m getting through this time.”