Alabama to Close Most of Holman Prison 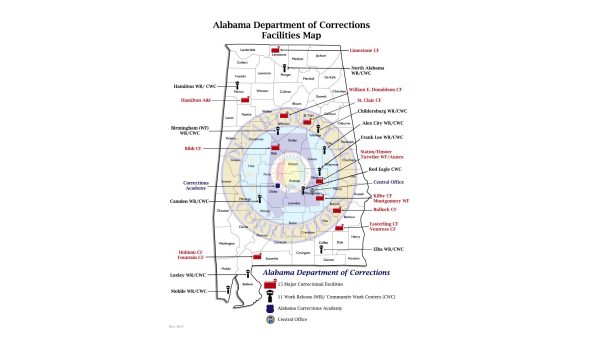 Holman prison is one of 15 major correctional facilities in Alabama.

The Alabama Department of Corrections is accelerating plans to close most of Holman Correctional Facility in Atmore.  Officials made the announcement Wednesday, citing growing maintenance costs and safety concerns at the 51-year-old prison.

Holman opened in 1969 and has faced high levels of violence, overcrowding and understaffing over the years. The maximum security prison houses the state’s only execution chamber, which officials say will remain in use. Other parts of the prison will also remain open to house more than 150 death row inmates and around 150 “low-risk” inmates serving life without parole.

Most of Holman’s main facility will close, including the cafeteria, medical unit, administrative suite and housing units. Officials say those inmates who remain at the facility will receive health and food services from Fountain Correctional Facility, located about one mile away. They will also continue to work at Holman’s auto tag and clothing plants, which will remain open.

More than 600 inmates will be transferred to other state prisons, which already face high levels of overcrowding and understaffing. In a statement, lawyers with the Southern Poverty Law Center and the Alabama Disabilities Advocacy Program called the move a “band-aid solution.” Both groups are plaintiffs in a class-action lawsuit against the ADOC regarding mental health and medical care of inmates.

“The movement of people at Holman to other facilities will only exacerbate the already deadly levels of overcrowding and the understaffing of correctional officers and mental health professionals at those facilities,” said attorney CJ Sandley.

Prison officials did not release a timeline for the move, citing security concerns. In a statement, corrections commissioner Jeff Dunn said officials will make “appropriate modifications” to ease the transition.

“We currently are working hard to identify and implement measures to account for the impact of increased populations across the correctional system,” Dunn said, “and to ensure continued access to health, educational, and rehabilitative services and programs for our inmate population.”

Dunn said daily maintenance at Holman has become too risky and unsustainable to continue. He said across the state, Alabama’s prison infrastructure “is failing.”

Gov. Kay Ivey is awaiting proposals from approved developers for a plan to build three new regional prisons to replace more than a dozen facilities that house male inmates. Officials say they expect to have construction proposals by the end of April.