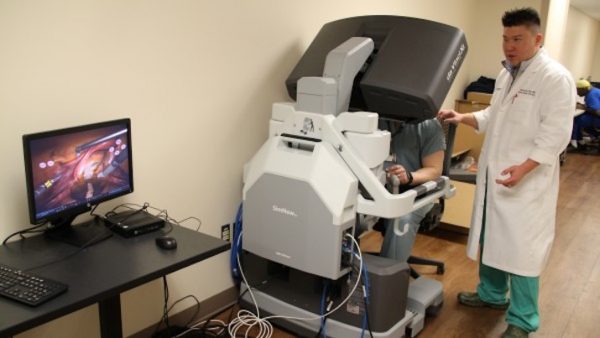 Across the country, many surgeons are learning to use more than just scalpels and forceps. In recent years, a growing number of medical institutions have invested in the da Vinci robot, the most common device used to perform robot-assisted surgery.

Compared to traditional open surgery, robotic surgery is minimally invasive, and recovery time is often shorter, making the technology attractive to patients and doctors. But the da Vinci surgical system is expensive, priced as much as $2 million, and recent studies show that for certain procedures, it can sometimes lead to worse long-term outcomes than other types of surgery.

Even so, robot-assisted surgery has become common practice in some specialties, such as urology and gynecology, and that growth is expected to continue, which means more surgeons are learning to use the device.

“It’s not necessarily, ‘Is robot better?’” says Dr. Kenneth Kim, director of the multi-specialty robotic training program at UAB Hospital. “Robot is just another tool that they need to master just like any other surgical tool.”

But “mastering the robot” can be a challenge.

“It never was an issue because open surgery, like scissors, like everyone learns how to use scissors in kindergarten,” Kim says. “Everyone knows, functionally, how to use a knife. But with the robot, it’s a totally different new tool and it’s more complex, so now that has a separate learning curve.”

The da Vinci robot is not self-operating, at least not yet. Instead, it works almost like a big video game. The surgeon sits at a console station and uses hand and feet controls to manipulate a separate surgical part attached to the patient.

One way students get comfortable with the device is by operating in virtual reality. At training institutions like UAB, surgical residents use a simulator to complete monthly tasks and practice common procedures. OBGYN resident Teresa Boitano says the exercises help develop skills that are directly applicable to the operating room. During one of these tasks, Boitano moves the robot arms to precisely place colorful rings onto corresponding spikes.

“And so I’m going now to grab this first ring and at the same time I’m thinking, ‘OK now where do I need to go to get the next one?’” Boitano says. “You’re always trying to stay ahead of the game but then also, making sure you’re not doing any errors at the same time.”

If she does make a mistake, the machine will tell her. Kim says the latest simulators come equipped with advanced motion-tracking technology. So while Boitano’s practicing this task or doing a run through a hysterectomy in virtual reality, the simulator records her movement – how accurately she uses the robot arms, or how fast she completes the exercise. It provides objective data about surgical performance.

“The analogy is that now you don’t have to worry about learning how to drive a car because everybody could get onto the street, they are taught the basic principles of driving a car,” Guru says. “The million-dollar question now is, ‘When would you allow them to get onto the expressway?’”

Guru says that is the next step, when surgeons specialize in different procedures.

Dr. Monica Hagan Vetter, of The Ohio State University, has studied robotic training programs across the country. She says using a simulator to measure surgical ability helps ensure surgeons have a certain level of skill before they actually operate on people.

Dr. Kenneth Kim says simulators and the data they provide help streamline the teaching process and offers the opportunity to give students more objective feedback. It is a way for surgeons to learn to use the da Vinci robot as a tool, but Kim says they still have to watch and learn.

“The simulator is good, but it can only simulate so much,” he says.

In the real world, Kim says robot-assisted surgery is not right for every patient. A surgeon needs to know when to use it and when not to use it, and those decisions can change as researchers continue to study patient outcomes from robotic surgery.