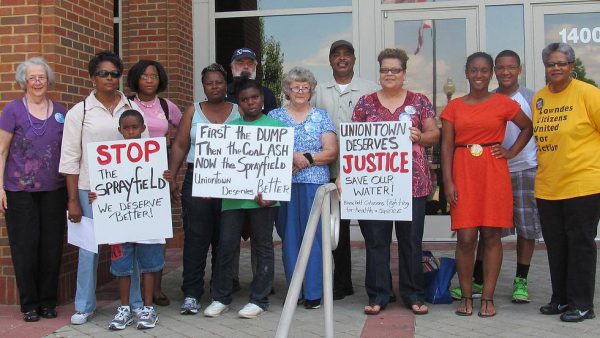 Residents and activists in Uniontown hope that $31 million will finally lead to a functioning sewage system.

Uniontown is set to receive more than $31 million from a federal grant and matching funds to address a decades-old sewage issue. But some say the problem should have long been fixed. In 2012, the city received almost $5 million for the same problem. Now, some residents worry that without proper oversight, history could repeat itself.

Ben Eaton knows just about every street in Uniontown. That’s not hard since the city stretches about two miles end to end.

Eaton, a local activist and recently-elected county commissioner, drives past the high school and pulls to a stop in front of what looks like a small lake surrounded by a fence.

“What you’re looking at is the lagoon,” Eaton says. “This is the primary sewage treatment facility for Uniontown, Alabama.”

Eaton laughs because he says the treatment facility does not work. Cracked pipes leak raw sewage. Rainwater and large amounts of waste from the local catfish plant overload the system. Untreated water regularly contaminates local groundwater and creeks. Eaton says it takes a toll on residents.

“There are times when people say they really can’t sleep at night because of the odor,” Eaton says.

The lagoon is Uniontown’s main sewage treatment area. It frequently overflows due to rain and large amounts of waste from the local catfish plant.

Uniontown is a poor, rural city in the Black Belt region of the state. Most residents are African-American and they say there is no shortage of environmental concerns. The local landfill is full of toxic coal ash and a nearby cheese plant emits a strong smell.

Then there is the sewage problem. It has been going on for decades and is so bad that ADEM, the Alabama Department of Environmental Management, has repeatedly filed orders against Uniontown demanding a fix. Now, local and state officials say it is going to happen, with more than $31 million in funding. Most of that is federal money from the USDA, with a smaller match expected to come from state and local entities

Ben Eaton is not optimistic. He says the last time Uniontown received a federal grant for this issue, it did not go so well.

That $4.8 million was a different grant from a few years ago for the same sewage problem. Uniontown hired Sentell Engineering to come up with a solution. Sentell was criticized by environmental groups and politicians, who say the company wasted money. Specifically, Sentell spent more than half a million dollars to build a discharge site that ADEM later found to have had several design flaws. The city never used it.

“We’re concerned that the city of Uniontown continues to use the same engineering firm, Sentell, that improperly engineered a supposed fix during the last grant cycle,” says Nelson Brooke of the conservation group Black Warrior Riverkeeper.

Today, Sentell will once again be in charge of Uniontown’s federal grant, which is a much larger amount this time. Ed Morris, a project manager for Sentell, says Sentell did what they could with the previous amount of money, but it was not enough to fix the system.

“Basically, most of the criticism has come from people not understanding what they are criticizing,” Morris says, “what goes into designing, what goes into getting it approved,”

Morris says state and federal agencies review and sign off on all engineering plans and guide the project. But Brooke of Black Warrior Riverkeeper says with the previous grant, there was a lack of transparency.

This time around, Brooke hopes to see more oversight from city and state leaders. He says one thing that is different is that he and fellow activists are being invited to the table to discuss the upcoming grant. That includes Ben Eaton, who is a member of the Black Belt Citizens group, an advocacy group. Eaton says the proposed plan for the grant is to fix all the broken pipes and pump Uniontown’s waste to a treatment facility about 20 miles away in Demopolis. He has mixed feelings about that.

“From the way I see it and the way I understand it, we might get our problem fixed, but there are no benefits for Uniontown,” Eaton says.

He would rather see the money used to build a treatment facility in Uniontown to generate economic growth. According to Sentell Engineering, that is still an option if the original plan falls through. Either way, Eaton and fellow residents hope this time, the plan works.