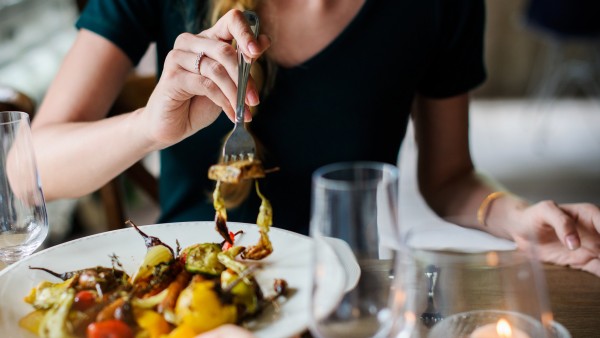 With early Time-Restricted Feeding (eTRF), all meals are consumed during a narrow window of time early in the day.

Researchers have known for a while that eating earlier in the day when metabolism rates are higher can help with weight loss. So can consuming all meals within a narrow window of time and then fasting for several hours.

“But there was a big question, like why does it help with weight loss?” Courtney Peterson, assistant professor in UAB’s Department of Nutrition Sciences, says. “Is it because it helps people burn more calories, or is it because it makes them less hungry, or both?”

To try to answer that question, Peterson and fellow researchers conducted a study to measure changes in appetite levels and the number of calories people burn when they use Early Time-Restricted Feeding (eTRF), a form of intermittent fasting.

Participants tried two different meal schedules. They spent four days eating from 8 a.m. to 8 p.m., the average schedule for an American adult, and they spent another four days eating the same meals between 8 a.m. and 2 p.m, a version of eTRF.

On the fourth day of each meal schedule, participants remained in a controlled environment for 24 hours so researchers could measure data including levels of the hunger hormone Ghrelin.

Peterson says the results were a bit surprising. They found that the eTRF schedule did not help participants burn more calories, but it did help them burn more fat and it lowered their appetite levels.

“That’s still a major victory,” Peterson says, “because if you can make people naturally less hungry, then that’s going to help them not only with weight loss, but with maintaining their weight.”

Researchers enrolled 11 overweight men and women, a small but appropriate sample size, according to Peterson. The study was published online Wednesday in the journal Obesity.

Peterson says the next step is to test whether people are able to consistently follow the restricted meal schedule and whether it can actually help people lose weight.