Top Wheelchair Rugby Teams Battle it out in Birmingham 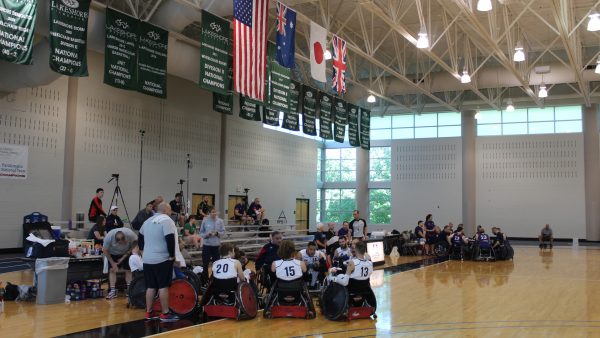 Teams from the U.S. and Great Britain take a break during the Four Nations Wheelchair Rugby Tournament.

On a recent weekday at the Lakeshore Foundation, teams from Great Britain and the United States take the court for the opening match of the Four Nations Wheelchair Rugby Invitational. Players crash into each other with heavy metal wheelchairs. Sometimes, they knock each other to the floor. The chairs, often referred to as “Gladiator” or “Mad Max” chairs, are designed to take hard hits, but there’s a welder on site just in case. Players dribble and pass the ball, aiming to carry it to the opposite end of a basketball court.

Sandra Watkins of Homewood watches from the crowd. It’s her first time seeing the sport.

“The slamming and the bamming of the chairs sometimes makes me jump,” Watkins says, “but I just, I love it.”

In addition to USA and Great Britain, teams from Australia and Japan are competing in the tournament.

“Well we have the top four teams in the world here,” James Gumbert, head coach of team USA, says. “And it’s not often that all four of us get together for just an event like this, you know it’s kind of a coup.”

Team USA is ranked number two in the world, just ahead of Japan and right behind Australia, which took home gold in the last Paralympics after a tense narrow victory over the U.S. The next Paralympics are about a year away, in Tokyo. Brad Dubberley is the head coach for the Australian team. He says the Four Nations tournament is a chance to check out the competition.

“As we sort of prepare for Tokyo next year,” Dubberley says, “it’s important to play these other top teams and try different tactics and get experience into other new players as well.”

Wheelchair rugby has grown a lot since it became a sport decades ago. It used to be called Murderball and was the subject of a popular 2005 documentary by the same name. The sport is open to any athlete, male or female, who has a disability that affects both the arms and legs.

Joe Delagrave, co-captain of the U.S. team, discovered wheelchair rugby after he broke his neck in a boating accident years ago. A former college football player, Delagrave was looking for a way to stay fit. He was immediately hooked.

“It’s full contact with the chairs, so you hit, tiny little car crashes every time we hit each other, so it’s intense that way,” Delagrave says. “And so that’s the first thing you fall in love with, but then the cerebral part of the sport is something that I love. The strategy of it, the high-speed chess game, the moving parts, having different levels of function on the court.”

For Delagrave, wheelchair rugby is a full-time job. When he’s not playing for the national team, he plays for one of more than 40 domestic teams scattered across the country. The best players from this league make up the U.S. team, which is based in Birmingham.

U.S. coach James Gumbert says events like the Four Nations Invitational are a chance to introduce new fans to the game, and he hopes it surprises people.

“If I do my job right,” Gumbert says, “the chair is a way to play the sport, not necessarily that you’re confined to it.”

For the players, he says that’s powerful.

“It’s a fantastic opportunity for people that have been told what they can’t do, to go out and show what they can do,” Gumbert says.

And fans are impressed. Jordan Lingo of Birmingham has been attending USA wheelchair rugby games for the past two years. Lingo, whose wife works with the team, says this tournament has him thinking about what’s next.

“We’re going to follow them to Tokyo in 2020,” Lingo says. “Hopefully they’ll take gold in the Paralympics.”

During the Four Nations tournament, games ended in overtime, there were one-point leads and tie breakers. In the end, Great Britain, the underdogs ranked last out of the four teams, claimed victory.

Looking ahead to Tokyo 2020, it could be anyone’s game.