The Story Behind Parcak’s “Archaeology from Space” 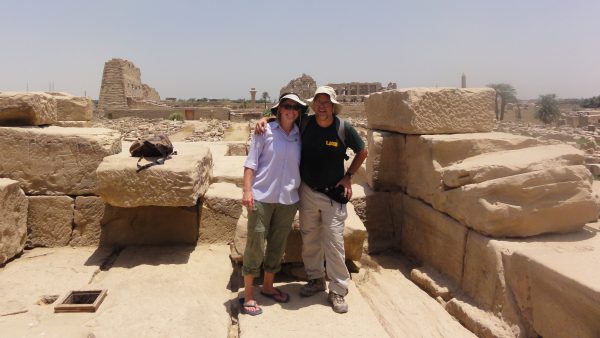 Sarah Parcak and her husband Greg in Luxor, Egypt.

In a coworking space just off of Lakeshore Parkway sits a potential game changer for the future of archaeology – the headquarters of the non-profit GlobalXplorer. The web-based platform invites just about anyone to become a space archaeologist by scanning satellite images in search of undiscovered archaeological sites and signs of looting. It is the brainchild of Sarah Parcak, who is well known for her work using infra-red technology to locate lost tombs, pyramids and settlements in ancient Egypt.

A snapshot from GlobalXplorer, which invites a user to search for unexplored archaeological sites in an unidentified location.

Parcak started GlobalXplorer after she won a $1 million TED prize in 2016. The idea is to get more people involved in archaeology and use that collective power to map and protect sites around the world. That is the same inspiration behind Parcak’s new book, Archaeology from Space: How the Future Shapes Our Past, released Tuesday. It weaves together stories from her excavations and those of her colleagues to explain how space archaeology works and why it is important.

In recent years, Parcak, an anthropology professor at UAB, has become a pioneer in the field. In addition to winning the TED prize, she has been featured on the BBC, named a National Geographic Explorer and she was interviewed on “The Late Show with Stephen Colbert” a few years ago. But Parcak says most days are not that exciting.

In her book, Parcak does not shy away from the “real work.” She describes the tedious process of planning and funding excavations and the 4 a.m. wakeup calls to dig under the scorching sun in the Egyptian desert.

There are also joyous moments of discovery, from uncovering a small piece of pottery to seeing the first satellite images of the lost city of Tanis. Parcak says it’s like finding clues to reimagine the past.

“While obviously I can’t go back in a time machine to ancient Egypt,” Parcak says, “you know you have the rich archaeological record. You have images on tomb walls. And you’re just extrapolating all that data. So you’re creating the realest world you can based on every available piece of information.”

How the Future Shapes our Past

The work is not only about describing daily life in ancient Egypt. Parcak says studying the past helps prepare for the future. We can learn what caused ancient civilizations to rise and fall, or how people responded to issues like migration and flooding.

Archaeology From Space is not only about who came before us, but what is yet to come. The book explores the potential for using artificial intelligence and drone technology to enhance the field of archaeology. Parcak points to tens of millions of unexplored sites around the world that offer untapped cultural and economic value. She also stresses the impact of looting and climate change that threaten this archaeological history. In many ways, the book is a call to action.

Parcak also hopes the book proves the importance of the humanities and the need to ask bigger ethical questions as society advances in science and technology. For many of those questions, answers could lie in the past.