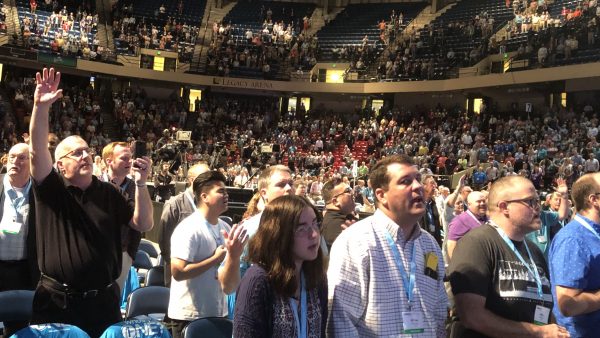 Southern Baptists worship in the BJCC Arena during the denomination's annual meeting on Tuesday.

Pastors at the Southern Baptist Convention on Tuesday enacted new measures to address a sexual abuse crisis in the church. The vote makes it easier to expel churches that mishandle abuse cases. The actions come after recent reports unveiled decades of sexual abuse in the church.

Abuse victims shared their stories on panels and at a protest rally at the group’s national annual meeting this week in Birmingham.

The Rev. J.D. Greear, president of the Southern Baptist Convention, says he’ll present a detailed plan today to address the issue.  Delegates are expected to vote on that plan afterwards.

Susan Codone, an abuse victim who grew up near Birmingham, says not much has changed since she was abused by her youth pastor at a church camp when she was 14.

“What I do want you to know that my youth pastor served in churches in Birmingham until his death in 2017,” she says. “That is 33 years of unimpeded ministry in this town.”

When she went to tell her senior pastor about the abuse, he also abused her, she says; both men threatened to harm or kill her if she told anyone.

Greear says he’s committed to addressing the sex abuse issue. The topic was a major focus in his 45-minute address on Tuesday.

“This is not a distraction from the mission, brothers and sisters. Protecting God’s children is the mission of the church,” he says.

Greear also talked politics. Most Southern Baptist evangelicals are aligned with Republicans on key issues, including abortion and homosexuality. But Greear warned against getting too caught up in partisan politics.

J.D. Greear , president of the Southern Baptist Convention, speaks during the annual meeting in Birmingham on Tuesday, June 11.

“When we tie our message too closely to a political platform, we put an unnecessary obstacle in the way of the gospel for half of our mission field,” Greear says.

He encouraged members to focus on their traditional values over political party and strategy.

Kim Kirkland, a delegate, or messenger, to the conference from Mississippi, says she agrees with Greear on eliminating sexual abuse in the church.

“The church has to stand up and protect those who are in our congregations – especially children,” she says. “That’s important.”

Samuel Rodriguez, pastor of the First Hispanic Baptist Church in Savannah, Ga., says for him it comes down to honor and respect.

“God wants us to live honorable lives and respect others,” he says.

The Greater Birmingham Convention and Visitors Bureau projects the gathering will have an $18 million economic impact on the city. 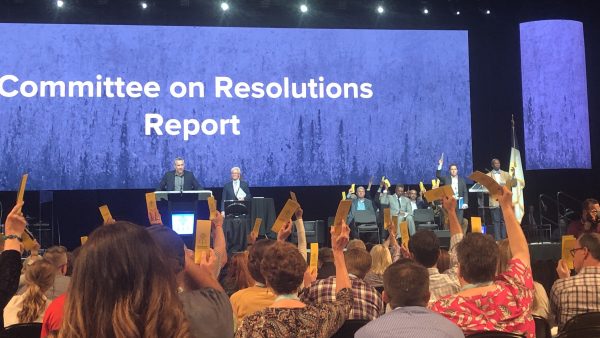 In the last day of the Southern Baptist Convention’s annual meeting in Birmingham, the nation’s largest Protestant denomination apologized for decades of sexual abuse and cover ups in the church.