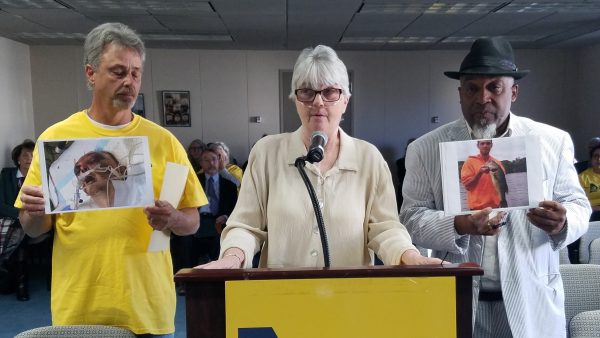 On the third floor of the Alabama State House in Montgomery, Dothan Pastor Kenneth Glasgow read aloud the names of 21 men who have died in Alabama prisons this year. Sandy Ray then showed a photo of her son Steven Davis, who was beaten to death two months ago by correctional officers at Donaldson Correctional facility.

“My son was beat,” Ray said. “We don’t do our dogs this way. Please, please, we have to have change.”

Advocates labeled empty chairs with the names of 21 male inmates who have died in Alabama prisons this year.

Glasgow and Ray were among several prison reform advocates who gathered Wednesday ahead of a meeting of Gov. Kay Ivey’s study group on criminal justice policy. Ivey established the task force in July to discuss ongoing issues affecting the state’s prison system. Wednesday’s meeting marked the first time family members and former inmates were invited to share their stories and present reform proposals.

About 20 people addressed the group of lawmakers and state leaders. Legal experts discussed the need for additional sentencing reform and funding for local courts. The crowd applauded as advocates spoke about corruption inside prison and the need for programming, education and healthcare for inmates.

Albert Pugh, who spent 30 years in prison and now directs a re-entry program, shared some of the challenges inmates face once they are released.

“They get out and they don’t even have a social security card,” Pugh said. “They don’t have any kind of ID. I mean these things are things that the DOC could do to help them so that they could be ready to go to work when they hit the streets, because sometimes it takes weeks to get a person’s ID or get a driver’s license or things like this, just so he can get a job.”

“What we heard today was people deeply concerned with the conditions in which their families are incarcerated under,” Dunn said, “and part of that problem is the facility issue.”

Dunn said the department is working to address issues like corruption and violence, but it takes time. He said their biggest focus is to hire more correctional officers.

The governor’s study group is expected to have its final meeting in January ahead of the 2020 legislative session.