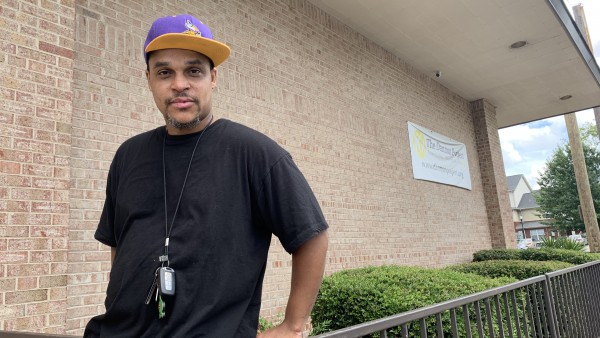 Michael Bryant stands outside of the Dannon Project where he completed the adult re-entry program.

Michael Bryant has served time in prison twice. The 40-year-old didn’t want to be locked up a third time. So months after he was released, Bryant finished the Dannon Project’s adult re-entry program. It helps non-violent offenders successfully return to the community.

Bryant is proud of himself, and every now and then he goes by to let people in the program know he’s doing okay.

“I feel like a small celebrity when I come through,” he says. “They’ll be like ‘man you’re doing good.’ I’ve been out eight months. I got a car, I’m driving, I’m working. I got my own spot and they helped me do that.”

The Dannon Project helps formerly incarcerated people like Bryant avoid future involvement with the justice system. Recently the nonprofit received a $6 million grant from the U.S. Department of Labor to expand its adult re-entry program. It’ll also launch a re-entry program for young adults in October.

Your past does N O T define you🙌

Bryant wasn’t part of the re-entry program the first time he went to prison, but the Dannon Project helped him get a state ID when he was released.

Years later, Bryant says he was at the wrong place at the wrong time, and he went back to prison. This time, toward the end of his five-year sentence, he reached out to the Dannon Project to plan for his release — something he says prison coordinators didn’t do while he was locked up.

“When you get ready to get out, they don’t really care about you. They give you a bus ticket and about ten dollars to eat with and that’s it,” he says. “I was on my own I after that.”

Bryant slept on the streets that first night out of prison. That’s not uncommon. Jefferson County Circuit Judge Teresa Pulliam says a support system can reduce recidivism. But helping former inmates find a job, she says, is key.

“It gives the person the ability to take care of their family, of course take care of themselves and hopefully they will be able to turn away from their old habits,” she says.

The Dannon Project helps former inmates get on their feet in other ways, too. Katie Clampit, the adult program coordinator, says the program’s  200 participants all have different needs. At first, they go through a sort of triage.

Once that’s done, then the job hunt begins. Clampit says the program’s participants fill out surveys to pinpoint their career interests. And most times, the program can help participants obtain career certifications.

“So that can mean they go into welding or HVAC or landscaping. And then our job placement team works with them to place them in long-term stable employment,” Clampit says.

Bryant, the former felon, says without the Dannon Project’s help, he knows exactly where he’d be.

“I’d probably be locked up or six feet deep or out here in these streets,” he says. “And I’m not fixing to be in the streets.”

Now, Bryant works in the kitchen at a local burger and beer joint. He’s happy, and he says everything is falling into place.

There are many alternatives to prison including drug courts, veterans courts and community corrections. But a new report says in many cases these alternatives hinder rather than help those they are supposed to serve.

The 2020 legislative session begins Tuesday and prisons are at the top of the agenda. Lawmakers are likely to consider proposals presented last week by Governor Kay Ivey's Study Group on Criminal Justice Policy.