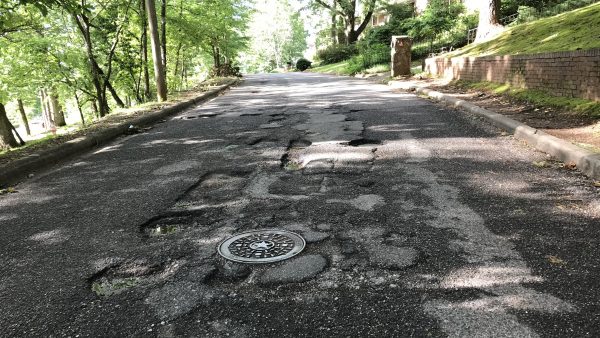 A particularly bad stretch of potholes on Clairmont Avenue in Birmingham

Drive around Birmingham and you probably have to dodge potholes. A strategy middle school boys would love is drawing new attention to the problem.

Recently, someone sprayed painted penises on potholes in an effort to get city officials to respond. And as you might expect, the potholes were filled soon after the graffiti appeared.

It’s happened in other cities. Most famously, or infamously, a self-described “road artist” in Manchester, England, drew penises on potholes to spur city action. He goes by Wanksy, a nod to the English street artist Banksy.

But if we’re going to talk about body parts, potholes may be more like a hangnail. Something minor, but really annoying.

Laura Gallitz knows the potholes on Clairmont Avenue on the city’s east side, intimately.

“I was trying to think of a day when I’ve had my driver’s license and lived in Birmingham that I haven’t been on Clairmont Avenue and it’s pretty difficult,” Gallitz says.

She says you can avoid some of them, but there’s one stretch that’s bumpy like a bad acne outbreak.

“There’s potholes all the way across and it’s been that way for several months now,” Gallitz says.

It’s the same thing in Gwendolyn Cook Webb’s west side neighborhood.  In April, she spoke at a Birmingham City Council meeting about how expensive it is to repair damage to her car.

“The potholes are no longer potholes they’re gullies,” she told the council. “We need some serious help.”

Sometimes the potholes draw blood. Chad Fisher is a trombonist most know for playing with the group St. Paul and the Broken Bones.

Chad Fisher stands along Arlington Avenue in Birmingham where a pothole caused his biking accident. The road has since been repaired.

Fisher rides his bike for exercise and fun. Earlier this month on an evening ride he was coming down a hill near Birmingham’s Five Points South and saw hazard signs on the sidewalk. He realized they were for a pothole, but he was moving at a pretty good clip.

Fisher went over the handle bars and landed on his back. He fractured two ribs, plus damaged his collar bone and shoulder. He’s still performing music, although he’s far from full strength.  Of course, it’s hard not to point out the band is called St. Paul and the Broken Bones.

“I’m living up to the band’s name for sure this year,” Fisher says.

It’s clear potholes have been on city leaders’ minds. Last month the city posted a video on social media showing crews filling in some holes.

A spokesman for Birmingham Mayor Randall Woodfin says they’d prefer people not spray paint potholes, but it hasn’t changed their approach. He says they try to repair the roads within a week of being made aware of it. Residents can call 311 to report potholes.

That squeaky wheel strategy is helpful, but incomplete according to Lucius Riccio, a former commissioner of the New York City Department of Transportation. He’s now at Columbia University.

“In the long run you really should be looking at the strategy of preventing potholes,” Riccio says. “Doing enough road resurfacing to replace the roads as they start to fail before they go to complete failure and crack up and fall apart.”

Birmingham is in the midst of a $5 million paving project. That’s enough to resurface 20 miles of roads by November. The mayor has proposed $8 million for the upcoming budget. An online color-coded map from the city shows what roads need attention in red and which projects are funded in green. The squiggles of red practically overwhelm the green.

That gap all but assures Birmingham will spend more time chewing off the hangnails that are potholes. More preventative lotion or a nice manicure, for the roads will have to wait.