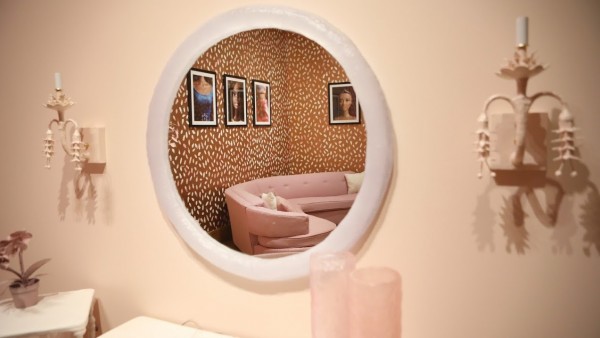 Believe it or not, Barbie is reaching retirement age. The iconic doll turns 60 this year. An exhibit opening this weekend at the Birmingham Museum of Art explores Barbie, but it wasn’t something that initially excited contemporary art curator Hallie Ringle.

She says when her boss suggested a project about the toy, she dreaded it. That’s because the big knock against Barbie is that she represents a narrow beauty standard, one that’s blond, white and impossibly thin.

“How am I ever going to complicate her sufficiently to communicate that to an audience, so we’re not turning this into just a celebration of white womanhood?” Ringle says.

Ringle couldn’t help but think back on her own childhood playing with Barbies.

But she wanted to make the exhibit approachable. She developed the idea of a life-sized, reimagined dream house with Studio BOCA, an interior design firm run by Kate Taylor Boehm and her sister.

Boehm’s memories of Barbie go to a different aspect of the toy, a symbol of empowerment. When Barbie was introduced in 1959, she was a career woman. Boehm says for her, Barbie offered a way to imagine being a professional.

“So we would have our little set-up with our pencils and our paper and our company that we started,” Boehm says. “We just imagined ourselves as career people and we’d have Barbie sitting there answering phones and bossing people around, too.”

To build the exhibit, the sisters reached out to women artists they knew. More than 15 contributed works that came together to form the dream house. It’s perhaps more of a dream studio apartment. After all, it is in an art gallery.

Visitors can become Barbie in a way as they walk around and interact with items such as Barbie’s mirror and vanity, her dream couch or her work desk. There’s plenty of pink, too.

Empowered Barbie comes through in the exhibit title, “Barbie: Dreaming of a Female Future.”

Barbie’s bookshelf displays copies of “The Handmaid’s Tale” and “The Vagina Monologues.”

Just as Barbie is more than a doll, the works are layered. Take Barbie’s dining room table by Chattanooga artist Addie Chapin. The club sandwich, fish and grapes are plastic, of course. They’re spread over a white and red checkered tablecloth in the style of a Baroque still life. On the table is an open cookbook with a note from Barbie’s boyfriend Ken. It reads “To Barbie, From Ken, Happy Holidays!”

Not exactly. Chapin says that gift speaks volumes about gender roles. Below Ken’s note is a crab, which can be a symbol of death.

“The more and more we strive to create this perfect image, a lot of times that really doesn’t provide us with the life we hope it will,” Chapin says.

She says there’s a spirit of independence represented by a dream house of Barbie’s own creation.

“Barbie: Dreaming of a Female Future” opens to the public Saturday and runs through January 26.

The Birmingham Museum of Art is a program sponsor on WBHM, but the news and business departments operate independently.