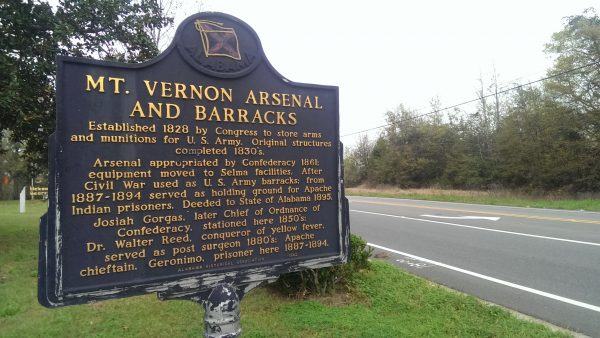 A historic marker details the history of the Mt. Vernon Arsenal and Barracks.

The National Trust for Historic Preservation announced this week that Mt. Vernon Arsenal, which later became Searcy Hospital, is one of America’s 11 Most Endangered Historic Places for 2019.

The site is just outside of Mobile in the town of Mt. Vernon, Alabama. The arsenal was constructed in the 1830s and supplied military equipment to regimens in Alabama and West Florida. According to documents filed with the National Register of Historic Places, the Mt. Vernon Arsenal is one of just two surviving arsenals established during this time.

The Mt. Vernon Arsenal/Search Hospital Complex, pictured here in 2016, has remained vacant since 2012.

During the Civil War, Confederate soldiers seized the site and controlled it until the end of the war. The arsenal was then converted into barracks for the U.S. Army.

From 1887 through 1894, Mt. Vernon housed Native American prisoners of war, including the Apache leader Geronimo. These prisoners lived in constructed villages on the grounds of Mt. Vernon. Many of them were later moved to Fort Sill, Oklahoma.

In the early 1900’s, Alabama converted the buildings at Mt. Vernon into a state psychiatric hospital for black patients, which was later renamed Searcy Hospital. When it first opened, Searcy reportedly employed one doctor to treat more than 300 patients. The hospital was eventually integrated in 1969 and remained open until 2012.

A welcome sign in front of Searcy Hospital in Mt. Vernon, Alabama. The psychiatric hospital closed in 2012.

Since Searcy Hospital closed, the site has remained vacant. Often referred to as the Mt. Vernon Arsenal/Searcy Complex, the area includes over 30 buildings, which are owned by the Alabama Department of Mental Health. Tiffany Tolbert, a senior field officer with the National Trust for Historic Preservation, says the historic location is at risk of falling apart.

“The structures on the site are deteriorating and it is in need of a preservation plan and revitalization,” Tolbert says.

The Mt. Vernon Historical Society, a local group in Mt. Vernon, has worked to preserve part of the site. Tolbert says adding the location to the national list of endangered historic places may help encourage state leaders to take further action.