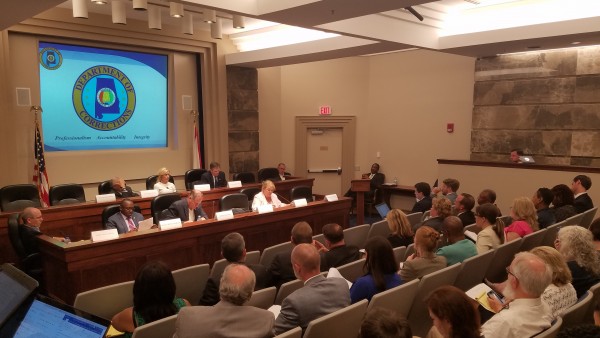 Gov. Kay Ivey’s Study Group on Criminal Justice Policy convened Wednesday in Montgomery to discuss operations of the Alabama Department of Corrections (ADOC). Earlier in the day, the group toured Staton Correctional Facility in Elmore County, one of the state’s 15 major correctional facilities.

“It’s crowded. It’s hot,” group chairman Justice Champ Lyons said of the prisons tour. “They have fans, bunkbeds, lights that stay on 24/7. You learn to sleep in the daylight.”

ADOC is largely understaffed and overcrowded, with record high levels of violence and suicide. In addition to an ongoing lawsuit about the mental health care and medical care of inmates, the department also faces the threat of federal intervention, following the April publication of a scathing Department of Justice report that detailed gruesome conditions in state prisons.

Ivey appointed the criminal justice reform group in July to study issues that plague the system. The group will develop reform proposals ahead of the 2020 legislative session.

Wednesday’s meeting was the second one for the group, which includes six legislators, the state finance director, the attorney general and the commissioner of ADOC. Officials with ADOC told the group they are working to reduce the amount of contraband in state prisons by conducting more frequent raids.  Staffing levels, they said, are improving. The department has hired 175 correctional officers since November 1, 2018, and 90 more are expected to graduate from training this month.

When asked about legislative action to help address issues of violence and suicide, ADOC commissioner Jeff Dunn said it requires a holistic approach.

“There is no silver bullet,” Dunn said. “There is no one policy recommendation that we can make that will solve all of the issues facing the department.”

He said extra funding this year from the Alabama legislature to raise officer salaries has helped recruit and retain staff, but more funds will be necessary to meet a federal court order to hire roughly 2,000 additional officers in the coming years. Dunn also encouraged legislative support to address deteriorating prison infrastructure.

ADOC and Ivey’s office are moving forward with a “build-lease” plan to replace about a dozen existing male facilities with three new regional prisons. Ivey recently released a list of five companies that are interested in building the prisons, including the nation’s two largest private prison companies, GEO and CoreCivic. Some lawmakers are critical of the plan, which is estimated to cost around $900 million.

“We really can’t build our way out of this,” Sen. Bobby Singleton said during Wednesday’s meeting.

Singleton later asked how ADOC is maintaining security “once the cameras are gone.” Officials said they are implementing strategies to better control and prevent contraband, but they did not provide data on how those efforts may be affecting rates of violence in state prisons.

Dozens of advocates, former inmates and family members attended Wednesday’s meeting, many hoping to offer comments on being directly impacted by the state prison system. The crowd was not allowed to ask questions during the discussion, though some chuckled and murmured as officials discussed efforts to improve security.

Edward Jones, who traveled from Dothan to attend the meeting with his faith group, said officials did not explore ideas for systemic change.

“I think we’re at a point now where the DOC here in Alabama is beyond restoration. It’s already proved itself not to be reliable, so we need to start looking at reformation … and until we start having dialogue like that, we’re just going to be going in the same path we were.”

The study group plans to meet again in October to discuss sentencing policy.