Documentary Wrestles with Race and Class On and Off the Mat 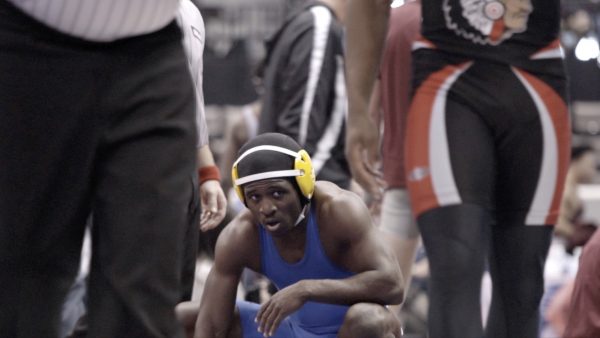 Wrestler Jamario Rowe during his final match at the Alabama State Championship.

At first glance, the film “Wrestle” is a typical sports documentary. It follows four members of the wrestling team at the now-closed J.O. Johnson High School in Huntsville as they try to make the state tournament. But issues of race and class permeate the film.

The school is majority black, lacking the resources of schools in more affluent parts of the city. The wrestlers struggle with their own issues including drugs, run-ins with the police and pregnancy. The film airs Monday evening on Alabama Public Television. WBHM’s Andrew Yeager spoke with “Wrestle” director Suzannah Herbert.

“I was actually very aware of the white savior trope and the typical sports narrative. But we as filmmakers decided to tell the story almost entirely through the wrestlers’ perspective and not have this narrator of the coach. And I think that coach Chris Scribner isn’t the typical white savior. Yes, he comes from privilege, but he’s struggling with his own issues of addiction and trying to navigate these two worlds, one where he comes from and then the one in Alabama where he’s decided to teach and move to.”

A scene in which a student was stopped by police for public urination:

“That was the most intense moment of the whole six months we were filming. We all felt so vulnerable. It was just me and [wrestler] Jailen [Young], who is 16, and a 14 and a 15 year old on the side of the interstate outside of Montgomery, Alabama. In the moment I was thinking that the camera was our best tool to hold the situation and the cop accountable for what was said and what was done. We’ve talked a lot with Jailen after the fact and about the experience and he says that he doesn’t even want to think about what would have happened if I hadn’t, as a white person with a camera, been there.”

Showing the students engaged in illegal activity in the film:

“We always were governed by consent. So if one of the wrestlers asked us not to film something, we would always respect that and put the cameras down. That was our number one priority. I think our job as documentary filmmakers is to try to capture as much of the truth and as much of the wrestlers’ lives as possible and that they are willing to share with us. Because we had such intimate access we were able to show a full picture of their lives.”

The film’s setting in the South:

“It matters that it’s set in the South and I think the film would be entirely different if it was a wrestling team say in the Midwest. It’s really important for me to tell Southern stories. I’m from Memphis. One, to dispel the stereotypes and the misinformation that we see a lot of times in the mainstream media. But also the painful history of our country is really palpable in the South in ways that it’s not so much in the North, for instance. And I think that the film really does give a voice to four teenagers and their families who would not normally be seen or heard,  and hopefully the millions of other people in similar situations can feel seen and feel heard.”