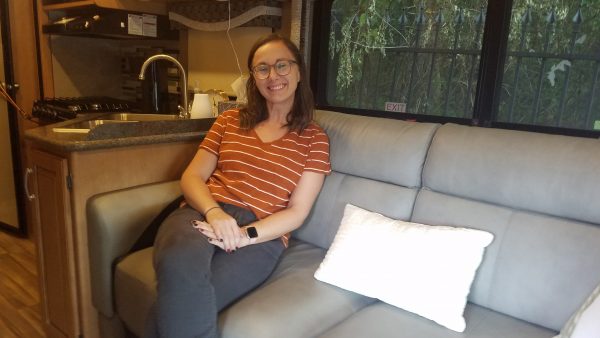 Rebecca Henderson sits on the sofa in the mobile unit, where she has counseling sessions with survivors of sexual violence.

There are no clues on the outside of the RV, no labels or identifiers, but inside is a fully functioning clinic. Rebecca Henderson leads the way up the stairs, where a sofa sits lined with pillows and a blanket.

“This is where we do the counseling,” Henderson says. “And so, it’s pretty homey in here. And you know, I try to decorate it to be nice and comfortable.”

In the back of the mobile unit is a medical exam room, equipped to conduct sexual assault exams and other medical screenings.

The medical exam room on the mobile unit can be used to give SANE nurse exams and other medical screenings.

The Crisis Center launched the mobile unit this summer. The Birmingham-based non-profit offers free services for victims of sexual violence, including rape response, counseling and advocacy.

Henderson, a counselor at the Crisis Center, says the goal of the mobile unit is to bring those same services to people who live farther away from the city.

“The mobile unit allows us to go into Blount, Jefferson, Walker and St. Clair counties, into these rural areas, to provide that,” Henderson says. “So maybe it’s only a 10-minute drive and therefore more feasible for them to get that.”

Sexual assault survivors in more remote areas can call the Crisis Center and make an appointment. The mobile unit then drives to a set location in that community, like a church parking lot, to meet the survivor.

Nationwide, there aren’t enough medical providers trained to care for survivors of sexual assault. It’s especially a problem in rural communities, according to RAINN, a national organization against sexual violence.

Candice Kato, a victim service officer in St. Clair County, says she used to refer clients in St. Clair to the Crisis Center’s clinic in Birmingham, about 30 miles away. But, she says, getting there is a challenge for many people.

“I think people just don’t know where to go and sometimes it’s just, they don’t think they have a voice to support them,” Kato says.  “And maybe, it’s very sad, but in some situations maybe they don’t even realize that they are victims.”

Most sexual assaults are not reported to the police. That concerns Rhiannon Reese, who coordinates the rape response program at the Crisis Center.

“For people that live in those smaller communities, they’re considered at much higher risk, because there are so many barriers to reporting,” Reese says.

She says one of the barriers in small, rural towns is that everybody tends to know everybody and there is also often more stigma around sexual assault. Survivors might not feel comfortable disclosing an incident to local police or medical providers.

Henderson says they hope to use the mobile unit to overcome some of these obstacles, through education and outreach.

“You know we’ve had the Me Too movement and people think we’ve made so much progress,” Henderson says. “But we still have areas, we have communities that are still shaming and blaming survivors. And we know the work has to be done on a community basis, on a systemic basis.”

For now, the mobile unit is funded through September 2020 by the Alabama Department of Economic and Community Affairs. Henderson says they hope to continue the service and create a model for other communities to replicate.