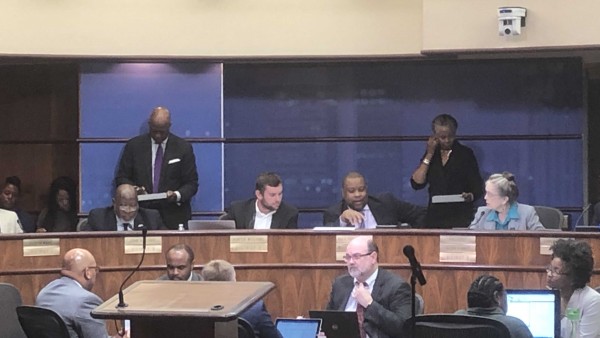 The Birmingham City Council approves a pilot of a new ridesharing service that will use vans.

The City of Birmingham will begin testing a ridesharing service that uses vans – similar to Uber or Lyft – to carry multiple passengers headed in the same direction.

The council approved the service at its Tuesday meeting and will spend half a million dollars to test it for six months beginning in December.

The Community Foundation of Greater Birmingham is contributing half of the funds for the system that will be operated by Via, a private company that operates in several cities in the U.S. and around the world. It is not part of the Birmingham Jefferson County Transit Authority.

“Many of us hear the stories of people either being late to work, being fired from work because they’ve been late too many times, or not being able to get to school on time or get back to their children in a timely manner because a bus broke down or a bus is late,” Woodfin said.

Each one-way trip will cost $1.50. Riders will schedule trips by phone or through a digital app.  Woodfin says the service area includes most Birmingham hospitals and clinics.

Also Tuesday, council members approved a resolution asking the public to share their thoughts on the future of Legion Field.

Birmingham’s historic football stadium is aging, and a newer stadium is being built downtown near the BJCC. Councilman William Parker says the public should be involved on the front end in determining what happens with the old stadium. Residents can send suggestions to [email protected].