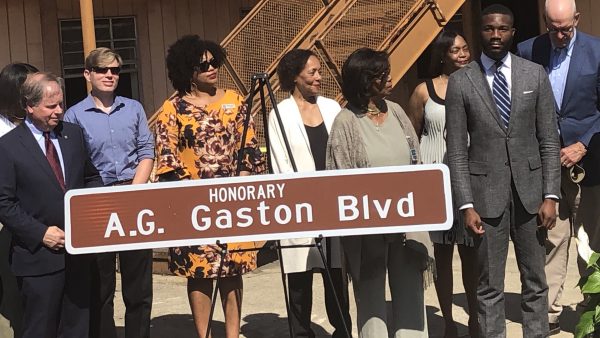 Leader unveil a sign for the honorary designation of A.G. Gaston Blvd., on 5th Avenue North Downtown. The motel is being restored.

Reverend Martin Luther King Jr. often planned strategy for the civil rights movement in room 30 at the A.G. Gaston Motel. For others, it was a place for wedding receptions and fancy dances. As restoration of the famed but deteriorating structure begins, Birmingham celebrated the motel’s anniversary and its founder on Monday.

The civil rights landmark on 5th Avenue North near the Birmingham Civil Rights Institute opened in 1954 and for years was a gathering place for civil rights leaders.   In May of 1963 there was an attempt to blow up the part of the motel where the Reverends Martin Luther King Jr. and Ralph David Abernathy usually stayed.

“There is no place any more famous for freedom than right here in Birmingham, Alabama,” Jones said as several foot soldiers and dignitaries looked on in the motel’s courtyard.

In the 1980s, it was closed and converted to subsidized housing.  Civic and business leader Bob Dickerson started working for Gaston’s Citizens Federal Savings and Loan Association in the 1980’s and says the city’s $10 million effort to restore the motel isn’t just about the motel.

Provided by the Jones Family.

Marvin and Brenda Jones celebrate their wedding with a reception at the A.G. Gaston on Christmas Eve, 1972. In addition to being a civil rights gathering place, the motel was a place for special social events.the city’s $10 million effort to restore the motel isn’t just about the motel.

“We cannot allow, not only iconic structures like this, but iconic people like Gaston to  fade into history,” Dickerson said.

Dickerson sponsors an annual business conference based on Gaston’s economic principles and commitment to small business.  He says Gaston’s legacy will be preserved during the restoration project by ensuring that small and minority businesses have opportunities for contracts.

“Hopefully this will spill over into other projects, not only in the Civil Rights District, but in the whole northwest part of downtown,” he said.

Jack Pyburn is the historical architect for the project. His job is to make sure the restoration reflects the motel’s most significant period.  Warm pastel colors that had defined the hotel since it closed in 1980s will take on a different look with the restoration when melon colored panels peel back to show light-stained wooden walls around the doorways.

“It was a very invigorating place to be in, just by virtue of the architecture,” Pyburn said.

Monday’s events capped off a weekend of activities, including an honorary designation for part of 5th Avenue North as A.G. Gaston Boulevard.  On Sunday, the Birmingham Civil Rights Institute celebrated Gaston and his wife, Minnie Gaston, with a new exhibit.

Their niece Carol Jenkins, a journalist and author from New York, wrote a book about Gaston. She was in  Birmingham for the celebration and  talked about the role the Gastons played in Birmingham’s African American community. In addition to the bank, they owned several businesses including a business school, an insurance company and a funeral home.

“They provided services from the cradle to grave – truly in every single way,” Jenkins says.

City officials say the motel restoration is scheduled to be completed by December 2021. 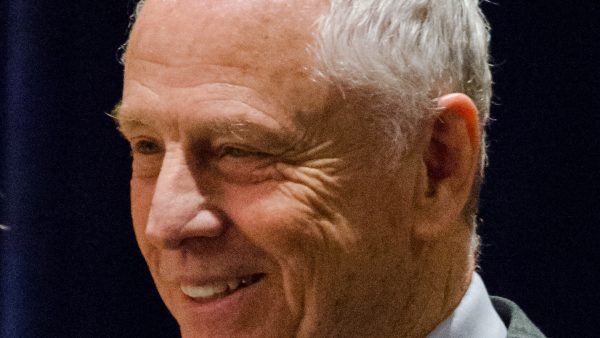 The Southern Poverty Law Center, a Montgomery-based civil rights watch dog group, dismissed its founder Morris Dees, with little detail on what led to the ouster.