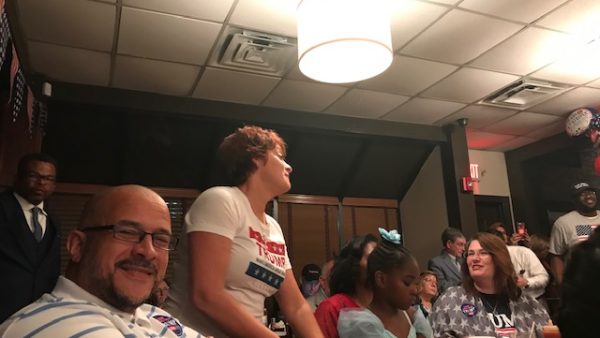 Deanna Frankowski (standing) was one of several area Republicans who say they've committed to support Trump in his bid for reelection.

A few dozen Birmingham-area Republicans ate ribs and pulled pork sandwiches at Jim ‘N Nick’s Bar-B-Q in Homewood as they watched President Trump launch his 2020 reelection campaign. Trump spoke at a rally in Orlando for more than an hour, touting his accomplishments on issues ranging from immigration to the economy.

Several at the watch party say they plan to support the president regardless of which other Republican candidates challenge him in the primary. Springville’s Terri Lapoint is among them. She says she doesn’t need to wait and consider other contenders.”No, I’m a Trump girl. I really, I’m committed to supporting him.”

Lapoint says Trump wasn’t her first choice in 2016. She supported Republican Sen. Ted Cruz. But over the last few years, she says, Trump won her over. “What I’ve seen since then, I really do like.” She says he’s fulfilled his early campaign promises. She particularly liked it when the president during his speech attacked Democrats as being “socialists” for supporting left-leaning policies on issues ranging from health care to immigration.

Deanna Frankowski of Leeds came dressed in a “Make America Great Again t-shirt.  When Trump told the audience his new campaign slogan would be “Keep America Great,” she lamented having to buy a new shirt. Frankowski says she’s been pleased with Trump’s record as president. “I think that he was on point. He went back over everything that he’s done and pled his case to be president again,” she says. Frankowski supported Trump early on in 2016. She says the other candidates then were part of the Washington establishment and hadn’t accomplished much. “That’s why I voted for him, because I was tired of all the mouthing and the talking and the not-getting-anything done,” she says. “I said I was ready to give him a chance and he’s done fantastic.”

Those at the watch party cheered for Trump through much of his speech, including his criticism of Hillary Clinton, his Democratic opponent in 2016, and his attacks on this election’s Democratic challengers. They also booed local media when Trump egged on his supporters in Orlando to do the same. A few Alabama lawmakers were in attendance, including Sen. Dan Roberts and Rep. Matt Fridy. Last night’s gathering was organized by the Alabama GOP, along with the Jefferson and Shelby county Republican parties. The watch party was one of several around the state.

Editor’s note: This story has been updated to include the name of the restaurant.