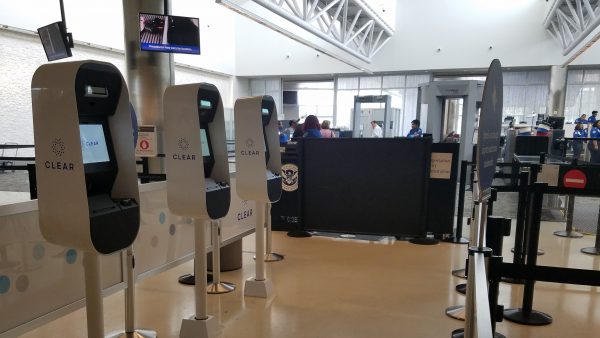 Travelers at the Birmingham airport who enroll in CLEAR can check their identity with a fingerprint or eye scan at a kiosk in the CLEAR security line.

Travelers flying out of Birmingham can now identify themselves with the touch of a finger or an eye scan. At a ribbon cutting ceremony Thursday, officials at the Birmingham-Shuttlesworth International Airport unveiled new fingerprint and identity verification technology from the biometrics company CLEAR.

Jenny Urban, director of aviation relations and compliance for CLEAR, says Birmingham is the 31st airport to adopt the technology.

“We’re changing the way that consumers experience the world by transforming the cards in the wallet into a single biometric ID,” Urban says.

At airports, the company has its own kiosks to scan a person’s fingerprints and eyes. That information is used to create a CLEAR account, linked to the person’s identity. Once in the system, travelers can use a separate security line designated for CLEAR members before proceeding to the Transportation Security Administration (TSA) physical screening area.

CLEAR officials say passengers benefit by saving time and not having to pull out an ID; their fingerprints or eye scans pull up that information automatically.

The CLEAR system is open to any U.S. citizen with a valid driver’s license or passport. It is optional and costs $15 a month. Members who also have a Delta Skymiles number can link their account with their Delta boarding passes.

Thursday marked the first day travelers could enroll at the Birmingham airport. Some people seem open to the idea.

“Possibly,” says Kevin Mullins of Birmingham. “I fly maybe three or four times a year, so I’m not a very frequent flyer.”

Others, like Sally Griewahn of San Antonio, Texas, say the technology would be useful when traveling outside of Birmingham.

“I probably would utilize it if I had to fly out of airports that were busier,” she says. “But because most of the places I fly in and out of are smaller airports, I don’t see the need for it.”

Some travelers expressed concerns about privacy. Officials with CLEAR say the system has undergone a rigorous security approval process and the company doesn’t sell or share user data.

Nationwide, more than three million people have enrolled in CLEAR’s system, which includes membership at sports stadiums and arenas. That number is likely to grow. Last year, the TSA published a Biometrics Roadmap that outlines the agency’s goal to soon have this kind of technology in all domestic and international airports.