At Children’s Hospital, a Note with Lunch 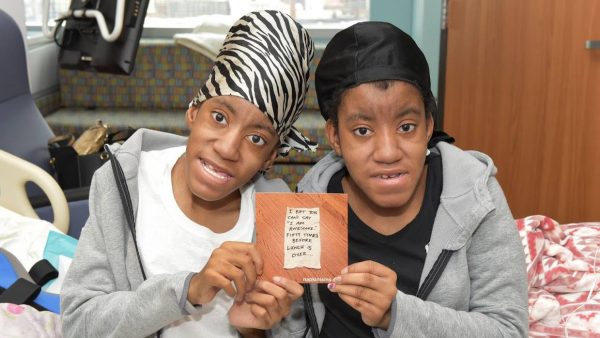 Starting this year, kids at Children’s Hospital of Alabama are getting a daily note with lunch, called a "napkinism."

Patients at Children’s Hospital of Alabama now get a little extra pick-me-up. Every day, kids there receive a note with their lunches. These notes are called napkinisms. The project sprung from a local writer, who spent years writing lunchbox notes for his own children.

Just about every morning, Billy Ivey hand-writes a note for each one of his five kids. Using a Sharpie, he scribbles down a witty joke or a simple “I love you” on a paper towel. Then he adds it to their school lunch. Ivey’s been doing that for over a decade.

“Couple years ago,” Ivey says. “I wrote a note that I thought was particularly funny and I took a picture of it.”

For over a decade, Billy Ivey has been hand-writing notes for his kids’ lunches.

“It said, ‘Remember, every time you smile, a mean kid gets diarrhea.’ And people, again, people couldn’t believe that I would write something like that to my kid, but the purpose of it was to make my kids laugh, to surprise them with something in the middle of their day.”

That idea resonated with people. Ivey started calling the notes “napkinisms.” He created a website and has a dedicated following on social media. Starting this year, kids at Children’s Hospital of Alabama are getting their own napkinisms. Every day, patients receive one of Ivey’s notes, printed onto postcards and passed out at lunchtime.

Six-year-old patient Blaklee Tew enjoys it. He picks up one of the napkinisms and reads it aloud.

“Potato chips are vegetables,” Tew reads. “Just go with it.”

Tew laughs, because he says potato chips do not count as vegetables.

Garland Stansell, head of communications for Children’s Hospital, helped launch the napkinisms partnership. He says the idea is simple.

“That somebody wrote a personal message, somebody’s thinking about you,” Stansell says. “Somebody cares that you’re here.”

And it never hurts to make a patient smile. Stansell says napkinisms is set to continue indefinitely, with plans to give staff the opportunity to write their own notes for the kids.

Outside of the hospital, anyone can join in and submit an idea on the napkinisms website. Billy Ivey says just a few words can go a long way.

Ivey says since starting the program at Children’s Hospital, there’s been an increase in public submissions on the napkinisms website. He says some of those notes may eventually wind up on patient lunch trays.