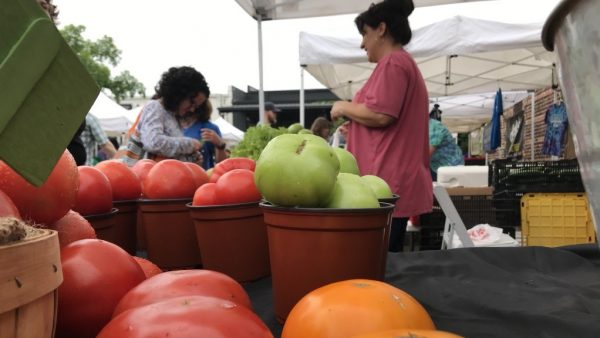 It's not yet clear how tariffs on Mexican tomato imports might affect Alabama growers like this tomato farmer from Cullman at the Pepper Place farmer's market.

Tomatoes will likely soon get pricier. The Trump administration plans to impose a 17.5 percent tariff on tomatoes imported from Mexico. Those could take effect this week. Florida growers, who once dominated the market for off-season tomatoes, lobbied for the tariffs  But today more than half the fresh tomatoes sold in the U.S. come from Mexico. Many Alabama growers and consumers are taking a wait-and-see approach.

During tomato season, Chef Chris Hastings uses lots of tomatoes in the dishes he creates. “We’ll probably buy anywhere from 600 to 1,000 pounds a week for both restaurants,” he says.

Hastings, who owns Hot and Hot Fish Club and OvenBird in Birmingham, says all those tomatoes go into dishes like pork belly BLT’s and gravlax with cured salmon and locally grown cherry tomatoes.

Like many acclaimed chefs, Hastings is a big supporter of local growers. The tariffs the Trump administration plans to impose on Mexican tomato imports probably won’t affect him much. It’s consumers who buy mass-produced tomatoes at the grocery store who will be hit hardest. Hastings says that’s unfortunate, but there’s also an opportunity.

“The hope would be, in my mind, we can get enough good tomatoes into the market that are grown around the South and get people introduced to what I think is a better tomato anyway and save money doing it,” he says.

But he says it’ll depend on how much the price of tomatoes increases. Economists at Arizona State University predict consumers could pay 40 to 85 percent more for fresh tomatoes. Scott Ireland of Ireland Farms in Alpine, Ala. says that won’t drive the average shopper to the farmer’s market. “When that tomato becomes too expensive for them, they’re just not going to buy,” he says. “It’s discouraging people from buying produce regardless of where it comes.”

Ireland was at his tent at the Pepper Place farmer’s market in Birmingham this past weekend selling bright green chard, carrots, and strawberries. He grows about 3,000 tomato plants a season. He says his customers are already committed to buying local.

“I think the people that have been coming here for years are coming, I don’t think anyone is going to see that this tariff is affecting Mexican tomatoes and then up and decide to come to market,” Ireland says.

Other local farmers say the tariffs won’t affect them much, either, since much of their business is selling specialty tomatoes to high-end restaurants.

But Hunter McBrayer, executive director of the Alabama Fruit and Vegetable Growers Association, says the tariffs are a step in the right direction. American tomato farmers have long struggled to compete with Mexico’s low prices. And even after the tariffs, McBrayer says those Mexican tomatoes would still be cheaper. But he says increasing the cost of Mexican tomato imports can help level the playing field,  giving our domestic producers a chance at staying in business.

He says research shows consumers are willing to pay a little more for local tomatoes. And he hopes the tariffs will prompt more people to support Southern growers. Others worry the net effect of the tariffs could be higher grocery bills and less money to spend overall, including at restaurants.