After the Destruction, Wetumpka Begins to Recover 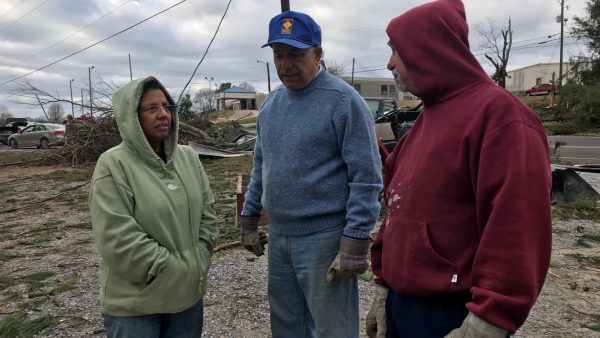 Wetumpka began what will likely be a long road to recovery on Sunday. It was one day after a powerful tornado ripped through the town, causing significant damage to a number of buildings and homes. Emergency responders say so far there have been only a handful of reported injuries. Residents were grateful, as dozens of volunteers and neighbors spent all day helping one another.

Bipin Kumar, a doctor in Wetumpka, has been there for decades. A few hours after the tornado hit, he went to check on his private practice on Highway 14, but huge trees blocked the road.

“It was a total mess. I could not even walk,” he said. “I had to park my car about at least two or three blocks away and then walk because the building was totally inaccessible.”

Several trees fell and punched big holes through his roof. Another roof – a metal one – lies curled up on his property.  It blew over from somewhere; he’s not sure where.

The tornado snapped trees like this one in Wetumpka.

Elmore County District Judge Patrick Pinkston was among more than a dozen people who bundled up from the cold Sunday morning and set to work on Bipin’s office, which looks like a house. “Primarily we’ve been removing trees off of roofs. We’ve been cutting and removing slack,” Pinkston says. “Lot of chainsaw work, lot of hauling work.”

John De Block, a meteorologist with the National Weather Service in Birmingham, worked Sunday — without pay because of the federal government shutdown — to survey the damage all over Wetumpka.

Weather officials say the Wetumpka tornado had estimated wind speeds up to 135 mph. Many trees just snapped. There have been only a handful of reported injuries so far. De Block says that’s in large part because weather officials issued a tornado watch five hours before the storm hit, so residents had ample time to go stay with relatives or take shelter in their homes.

He says it’s unclear how long before the town gets back on its feet, “but it’s a significant amount of damage. It’s gonna take quite awhile to recover from this.”

The storm destroyed two historic churches downtown, the senior center and part of the police department. The high school opened as a shelter. Many lost their homes and thousands lost power.

Volunteers there and at area churches served up hot meals. Some of that food came from The Coosa Cleaver in downtown Wetumpka. Workers grilled burgers outside the restaurant and shuttled them out to hungry residents and first responders.

Clay Cleghorn grills burgers outside the Coosa Cleaver restaurant for first responders and residents in need.

Others offered up hot soup, bottled water, and coffee. They say it’s the least could do to help their neighbors begin to pick up the pieces.