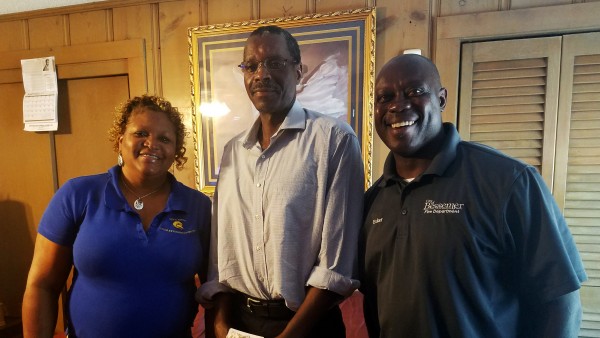 Alvin Kennard (center) was sentenced to life without parole after stealing $50 from a bakery. Now, he is back home in Bessemer. Pictured are his niece, Patricia Jones, and friend, Esker Ware.

Alvin Kennard was released from Donaldson Correctional Facility about a month ago. Now at his brother’s home in Bessemer, he says he feels good.

“I can go to the shower and shower by myself,” Kennard says, “get myself together and put on me some nice clothes, and I can walk out in the yard and listen to the birds whistle.”

“It’s a wonderful thing to be able to, you know, to acknowledge that… it ain’t like it used to be,” Kennard says.

In January of 1983, Alvin Kennard was armed with a knife when he stole $50.75 from a bakery. According to his attorney, Carla Crowder, Kennard had previously pled guilty to three minor property crimes. Because of that, he was sentenced under Alabama’s Habitual Felony Offender Act, which allows stricter sentences for people convicted of multiple felonies. Crowder says at the time, the mandatory sentence for Kennard’s case was life without the possibility of parole.

In the past 20 years, there have been some changes to the Habitual Offender Act, but because those changes were not retroactive, hundreds of inmates continue to serve sentences of life without parole under previous requirements. Alvin Kennard was only released after a judge took an interest in his case and ordered a new sentencing this summer.

State Senator Cam Ward, a member of the governor’s task force, says the Habitual Offender Act is part of that conversation.

“It’s definitely something that should be reviewed,” Ward says. “Now getting the votes and the legislature to approve that, that’s going to be a challenge.”

Ward says lawmakers typically do not support efforts to reduce sentences, for fear of being seen as soft on crime.  Despite that, advocates are encouraged. They say they will continue to offer suggestions for criminal justice reform and plan to attend all study group meetings in Montgomery.