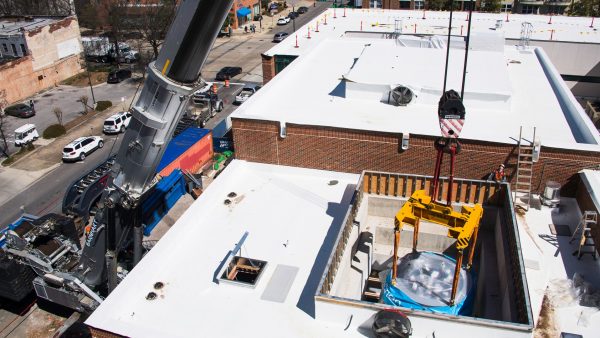 A specialized crane lowers the 90-ton cyclotron through the roof of a building.

A 90-ton cyclotron arrived Tuesday on the campus of UAB. The machine will be part of a new proton therapy center, bringing a specialized cancer treatment to Alabama.

A crowd gathered Tuesday to witness a crane lift the giant cyclotron and slowly lower it through a hole in the roof of a building. That building, called the UAB Proton Center, was built specifically to house the machine.

Dr. James Bonner, chairman of radiation oncology at UAB, watched from the street below.

“Well you can see it’s kind of a glob of metal right now,” Bonner said of the new cyclotron. “So it’s been put together in a tight format so it can be shipped across the ocean.”

The cyclotron was built in Germany and took about a month to make its way to Birmingham. It costs around $25 million. The device is owned by a company called Proton International, but UAB clinical staff will be in charge of operating it. Once it is up and running, the cyclotron will spin protons really fast and generate a beam of energy to target cancerous tumors. Bonner says this is the first time this kind of treatment will be available in Alabama.

“I don’t think it’s worth the investment to have one of these on every street corner,” Bonner says. “This is a type of radiation that’s very specific for certain types of tumors.”

He says the cyclotron is more precise than traditional radiation, so it doesn’t damage surrounding tissue. That is better for treating kids or targeting tumors at the base of the skull. Bonner says UAB hopes to treat its first patient with the machine in January of next year.