With $30 Million Gift, UAB Says Cancer Research is the Future of Birmingham 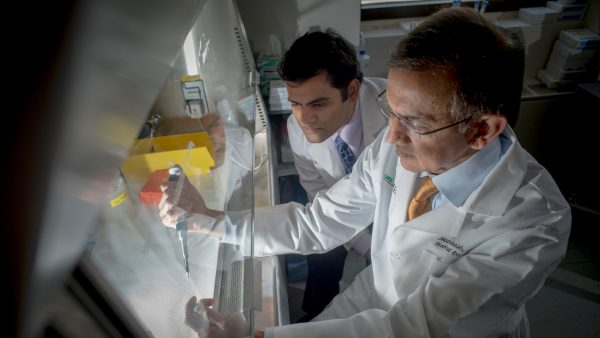 Eva Carter is in her 70s and for most of her life, she says she never had any health problems. That changed five years ago.

“I was bulldozed with, ‘You have the most aggressive type of breast cancer,’” Carter says.

She received a diagnosis of triple negative breast cancer. Her doctors at UAB recommended a clinical trial. She would test out a new drug therapy not yet approved by the FDA. Carter agreed to give it a try.

“I was fighting for my life and anything that I could do to enhance my chances of living longer, I was going to do it,” she says. “If it didn’t work, it didn’t work.”

Clinical trials are experiments, research studies to test the effectiveness of a new drug. The cancer center’s director, Dr. Michael Birrer, says that should not deter patients. He says today, more than ever, these studies are carefully done and represent the future of oncology research. For that reason, the center wants to do more of them, with plans to eventually triple its number of clinical trials. Birrer says they are especially interested in increasing the amount of early phase trials, when drugs are first tested on humans.

“It’s no longer, ‘Hey here’s a phase 1 and your chance of responding is very low,’” Birrer says. “We now have success rates in these trials that’s high, and so it’s much more relevant to patients.”

There is also an economic incentive. Birrer says the recent $30 million gift from O’Neal Industries will help fund physician-led research, hire clinical staff and increase patient participation. This lays the groundwork to attract small pharmaceutical, or biotech companies. Birrer says these groups are changing the face of research. They are nimble and hungry to develop new therapies. With enough investment, he says Birmingham could develop a biotech park in the future.

“Companies will come and say, ‘We have a new agent, looks good. Can you open this trial up and get the job done?’” Birrer says. “If we can do that fast enough and we do that often enough, I think they’ll open up an office down here or they might even bring their headquarters down here.”

For patients, that means access to the newest therapies, and they typically do not have to pay for treatment. But participating in a clinical trial is not easy. They often require daily or weekly visits to the cancer center and following a diet or exercise plan. Additionally, there are the side effects. For Eva Carter, it was worth it.

Carter says she understands why some people hesitate to participate in trials. Specifically within the African-American community, she says there is a legacy of distrust, marked by the Tuskegee study, when African-American men were unknowingly left untreated for syphilis for decades. Carter says that is why it is especially important patients have doctors they can trust, who explain the clinical trial and any risks associated with it. She also says patients should do their own research.

“I am so happy that the lord gave me the wisdom and the courage and the internet to look up the information on a clinical trial,” Carter says.

This year, more than 500 people have participated in a clinical trial at the O’Neal Comprehensive Cancer Center at UAB. Next year, the goal is to enroll about 700. The growth is expected to drive economic development, but more importantly, it will offer more patients, more options to fight cancer.