Ushuaia Blue: A Play About a Life Devoted to Science 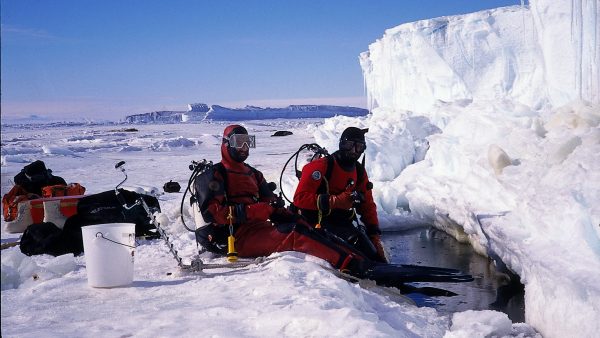 Marine and polar scientist Jim McClintock commissioned the play Ushuaia Blue, which is loosely based around his work in Antarctica.

Antarctica happens to be a perfect place to study the impacts of climate change. A UAB researcher has devoted his entire career to just that. This weekend, Professor Jim McClintock brings the issue to the stage, along with a love story. “Ushuaia Blue” explores the issue of global warming through the story of two marine biologists trying to save their relationship.

The Art of Science

Over the years, Jim McClintock has been to Antarctica more than 25 times, but when asked to describe the place, he struggles to find the words.

“No, the only way to understand Antarctica is to go their yourself,” he says. “That said, I think the closest that I’ve been able to describing it is in poetry.”

McClintock teaches polar and marine biology at UAB. Despite being a science guy, McClintock fully embraces the arts. Last year, he commissioned a play called “Ushuaia Blue.” It is loosely based around his experiences in Antarctica. McClintock says the idea is to reach more people.

“I just think there’s so much opportunity to use art and the humanities as a way to communicate what’s going on with science,” he says.

An important issue for McClintock is climate change. A few years ago, he published a book about his research and the loss of sea ice in Antarctica due to warming temperatures. Those same themes surface in “Ushuaia Blue.”

“I expected an exploration of science, research, et cetera,” he says. “And there is plenty of the science of climate change in the piece, but really this is really a story about a relationship.”

The piece follows a married couple, who are both marine scientists, as they travel from a small town in the U.S. to Ushuaia, a city at the southern tip of Argentina, and to a research station in Antarctica. McClernon says the story is about science, but it focuses on the human side of it.

“That’s what this is,” he says. “‘Ushuaia Blue’ is an exploration of obstacles, crises, conflicts that a pair of scientists encounter as they go through the passion of their research.”

Jim McClintock speaks with students in preparation for the first reading of “Ushuaia Blue.”

Connecting with the Audience

This week, McClernon and a group of six UAB students have been preparing for the first public reading of the play. One of those students is Victoria Cruz. She says it is not obvious, but the script will make an audience think about global warming.

Playwright Caridad Svich wrote “Ushuaia Blue.” To draft the story, she asked McClintock a series of questions about his life and his work, all kinds of things, from “What was it like to live in Antarctica?” to “What’s your favorite song?”

McClintock sees some of his answers to those questions reflected in “Ushuaia Blue.” For the most part though, the play is not about his life, but rather, a life devoted to science. Through that story, McClintock hopes audiences find a way to relate to scientists as people.

“They have love affairs and they have passion for what they do and what they see,” he says, “and they fall in love with strange places like Antarctica and it shapes their life.”

For McClintock, that means hundreds of publications, lectures and now, a play, all in hopes of bringing more attention to a changing world.