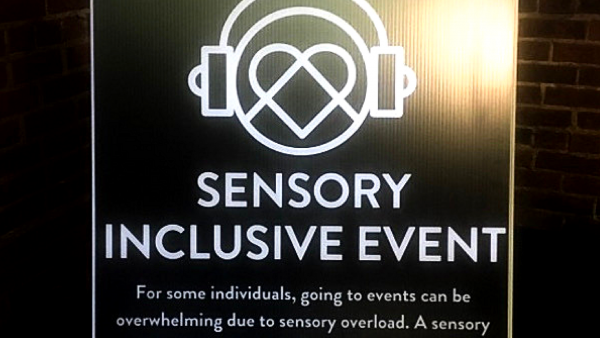 A sign welcomes people with autism to a special sensory room.

An outdoor music festival sounds like a great time for some people, but for someone with autism it can be a nightmare. Sloss Fest happens this weekend, and organizers say it’s the first music festival in the U.S. to be designated “sensory inclusive.”

Thousands of music fans will flock to Sloss Furnaces in Birmingham this weekend to catch performances from some of their favorite artists at Sloss Fest. But the noise and the crowds and lights can be a nightmare for someone with autism.  Festival organizers hope to make it easier this year. They say Sloss Fest will be the first music festival in the U.S. to be designated “sensory inclusive.”

You might wonder why people who struggle with loud sounds or bright flashing lights would want to attend a crowded music festival in the first place. Michele Kong, co-founder of Kulture City, an organization focused on creating sensory-inclusive environments, says “Why wouldn’t they though?” People who have visual or noise sensitivities still might enjoy music, she says. “It doesn’t mean you don’t enjoy basketball. You still love all those things but it’s just that you cannot go because the environment is not set up for you to go.”

Jay Wilson with Red Mountain Productions, which is producing the event, says it isn’t always easy to tell when someone with autism needs help. But there are a few signs. For instance, they might fidget more or act differently.

Festival staffers, including security guards and volunteers, have completed special training led by medical professionals and staff from Kulture City. Kong says they’ll use other resources like sensory bags, which include noise-canceling headphones, sunglasses, and other items to help those individuals calm down.

Organizers will also set up a sensory room for those who become overstimulated during the festival. People who are sensitive to noise will be able to take a break, calm down and head back out to enjoy the music. That’s exciting for Karen Willis, of Montgomery. She has autism and has been fighting for inclusion most of her life. “I was very excited and very happy because most people with autism aren’t able to experience these community events like the Sloss Fest” Willis says. She says now that it’s sensory-friendly, more people with autism and other disabilities can enjoy events similar to Sloss Fest. Even so, Willis hesitates when asked whether she plans to attend the festival this weekend. “It’s a wait and see,” she says.  She loves that she has the option, but says maybe she’ll go next year.