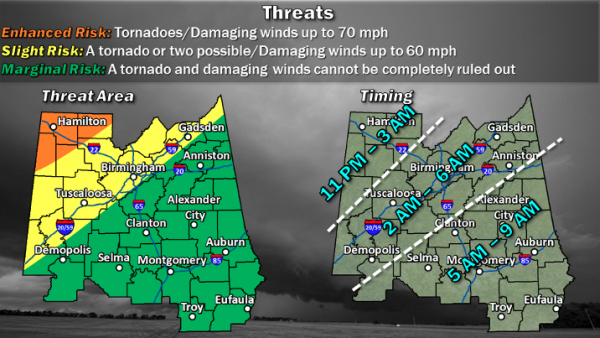 Some Alabama schools will delay or close school ahead of predicted severe weather beginning Monday night and lasting into early Tuesday morning.

Birmingham City Schools also announced a two-hour delay. This includes bus pickup times, school start times and employee reporting times. But Craig Williams, spokesman for BCS, says polling locations within BCS facilities will not be affected by the two-hour delay and will continue to be open for voters 7 a.m. to 7 p.m.

There is an enhanced risk of severe weather for northwest Alabama. Storms are expected to develop and reach Alabama’s western border as early as 9 pm tonight.

Other school closings and updates are available at the Alabama State Department of Education website.

Democrats across the country took the House and flipped several governorships during the midterms. It was a different story in Alabama. Democrats here lost every statewide race, and they lost five statehouse seats to Republicans. Recent news reports say the Alabama Democratic Party sat on hundreds of thousands of dollars — money candidates say could have been used toward their campaigns. Many Alabama Democratic candidates blame their poor performance on the lack of support from the state Party.