Promoting Humanities in a Math and Science World 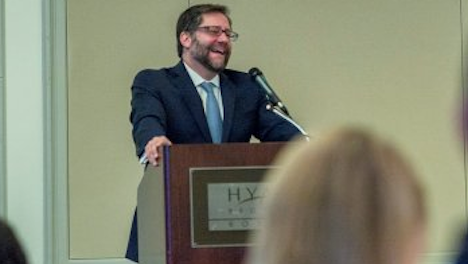 Source: National Endowment for the Humanities

Jon Parrish Peede became chairman of the National Endowment for the Humanities in 2018.

Listen to Alabama politicians talk about education and you’ll hear about workforce development. They say schools should focus on math and science to help industry grow. There’s less emphasis on music or literature. That concerns Jon Parrish Peede.

The Mississippi native became chairman of the National Endowment for the Humanities earlier this year. WBHM’s Andrew Yeager spoke with Peede during his visits to Birmingham last week.

Promoting humanities in a culture that seems to value computer programers over historians:

“English majors and music majors have the highest statistical acceptance rate to medical school for example. You realize the humanities are not the most lucrative in the first job out of college possibly and generally. But one thing I love about the humanities is that they are preparing you for the second job, the third job, the fourth job, for a career…It is those core skills, those critical reasoning skills that are embedded in the humanities, this is what the employers want.”

Responding to President Trump’s plans to wind down and eliminate the agency:

“The president said that it’s not a domestic spending priority. Having said that I talk to the White House often and no one is derogatory about the arts or humanities. That’s where the White House’s budget was. That went before Congress and last year the House and the Senate said we actually believe in the work of the NEH. And so last year when the president signed the omnibus bill into law, it was our largest budget in five years…Members of Congress in the House and the Senate understand from the citizens in their states that the work we do at public libraries, museums, with school teachers, that this is a value to them.”

On being a Southerner leading the organization:

“I was just in the Badlands of South Dakota and I was with the Lakota educators. In South Dakota they felt somebody from a rural state that matters to them. I was meeting with a House of Representatives member from Maine. She feels the same way. So I think in many ways, being from Mississippi becomes a stand-in for rural states across America.”