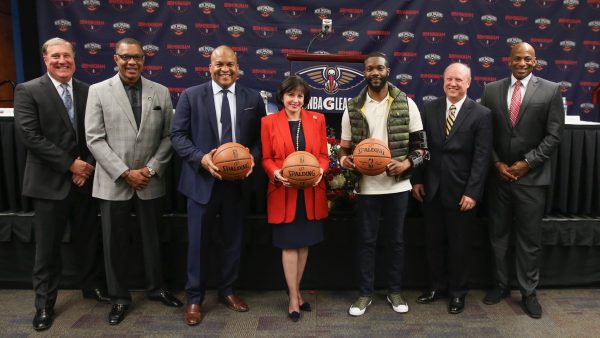 Officials with the city, the BJCC, and the New Orleans Pelicans announced the team will bring a development team to Birmingham.

The City of Birmingham announced Wednesday it’s getting a pro basketball team. No, the NBA isn’t coming here. But instead, the New Orleans Pelicans will launch a minor-league affiliate team, called a G League.

The move could bring an economic boost to the downtown area — eventually. The Pelicans development league should start playing at the BJCC’s Legacy Arena around 2022. By then the arena’s $125 million renovation is expected to be complete. Sports economist Todd McFall of Wake Forest University says that’ll give people time to absorb the concept of a G League.

“I see potential upsides,” he says, “but I think this is going to take a little bit of time, just because the idea of whatever the G League is isn’t really clear in people’s minds.”

Think of a G league as an NBA training ground for athletes, coaches and other staff — much like the Birmingham Barons are a minor-league baseball affiliate of the Chicago White Sox.

McFall says the G League draws excellent players, but it doesn’t have the caché of the NBA and it’s not as well-known as college basketball. Still, he says a team in Birmingham should do well. So will restaurants downtown, which could see more business. That’s not the case everywhere G League teams go. Take the Greensboro Swarm, for instance. McFall says that North Carolina G League has struggled because of the abundance of quality college basketball nearby. He says that level of competition doesn’t exist in Alabama collegiate basketball.

Dennis Lauscha, president of the New Orleans Pelicans and the New Orleans Saints, says one reason they chose Birmingham over other cities in the running such as Mobile, Shreveport, Louisiana, and Pensacola, was to expand the team’s reach. New Orleans doesn’t have the television market or the population Birmingham does. “What we do have though is we have a number of very avid fans that live in Louisiana, Mississippi, Alabama, and the Panhandle of Florida,” he says.

But perhaps Lauscha’s biggest challenge is to get people in Alabama just as excited about basketball as they are about football. No small feat.

The team doesn’t have a name yet. Ticket prices haven’t been set either, but Lauscha says they’ll be affordable. Nevertheless, McFall says it probably won’t be G League ticket sales that offset the cost of the BJCC renovations. But a state-of-the-art arena can draw other events to the city. “You could have bigger concerts. So in a nicer venue you’d have bigger names,” he says.

And if people don’t yet know what a G League is, they will over the next several months, Lauscha says. “Perhaps that’s the good thing about not moving in on day one,” he says. The team will play in Erie, Pennsylvania for the next few years as the Erie BayHawks until Birmingham’s arena renovations are complete. “We have some time to educate the fans. And to be quote honest with you, I think there are probably folks in New Orleans who don’t completely understand what the G League is.”