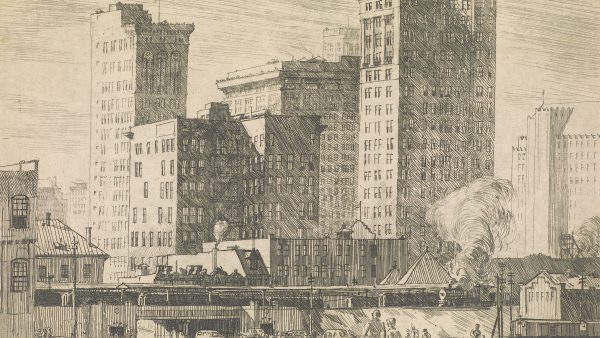 Richard B. Coe, American 1904–1978, Down Town Birmingham, about 1935, etching on paper; Collection of the Art Fund, Inc. at the Birmingham Museum of Art; Gift of John Peter Crook McCall and Doy Leale McCall, III
Listen
download

Images of these are part of a new exhibit at the Birmingham Museum of Art called Magic City Realism. The collection of etchings created in the 1930s by artist Richard Coe depict landmarks and everyday life of the city’s working class.

While some scenes may be familiar, Coe is a bit of a mystery.

Coe was born in Selma in 1904. He studied in many cities including Cincinnati, New York and Boston. He also had a studio for two years in Florence, Italy. He lived in Birmingham from 1934 to 1939 and Crawford suspects he returned to Alabama because of a family connection.

“It’s a difficult time for artists and everyone in the mid-1930s and his grandmother lives here and he can live with her,” Crawford says.

Coe participated in Alabama Works Progress Administration projects, including painting a mural in the auditorium of Woodlawn High School in Birmingham. And while it’s a guess, Crawford thinks the etchings were probably for a federal project too.

Richard B. Coe, American 1904–1978, Sloss Furnaces, about 1935, etching on paper; Collection of the Art Fund, Inc. at the Birmingham Museum of Art; Gift of John Peter Crook McCall and Doy Leale McCall, III

The etchings feature recognizable views from the city skyline to steel factories.

“I really wanted people to be drawn into what people already know in Birmingham and start to pick that apart for them,” says Crawford. “Show them how Birmingham is not only very similar to what it was in the 1930s but has also changed dramatically.”

One of those differences is rundown housing in and around downtown that was quickly built to hold industry workers as the city boomed in its first few decades.

Crawford says it’s notable what Coe is depicting and what he leaves out. His etchings include blast furnaces, downtown buildings built by that wealth and gathering places for workers.

“But he’s not showing things like the Alabama Theatre or sort of high-end housing for people who owned the mines,” says Crawford. “It’s a very specific portrait of the city.”

The Birmingham Museum of Art is a program sponsor on WBHM, but the news and business departments operate independently.