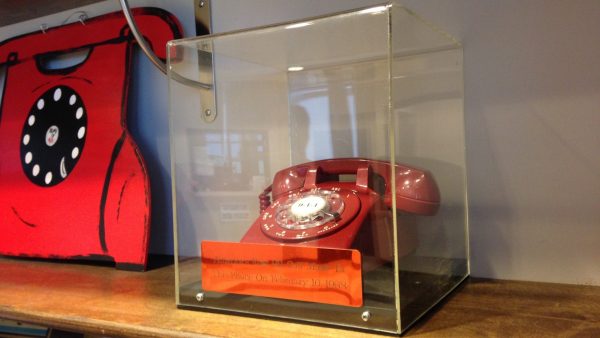 In an emergency, you call 9-1-1. It’s drilled into us from a young age. But it wasn’t always that way. In fact, the first 9-1-1 call was only made 50 years ago this month in Haleyville.

The town in rural northwest Alabama doesn’t hold back on championing its claim to fame.

A sign near the highway south of town declares “Haleyville – Where 9-1-1 Began.” Banners hanging from street lights bear the town seal with a red phone receiver and the words “Home of 9-1-1.”

Then, just inside city hall is a clear case holding the red rotary phone that took the first 9-1-1 call. It’s surrounded by proclamations and related newspaper clippings.

Haleyville Mayor Ken Sunseri says the phone gets eight to ten visitors a week, particularly from 9-1-1 dispatchers. He says it means a lot to the town, too.

Haleyville Mayor Ken Sunseri stands by the display in city hall that features the red phone that made the first 9-1-1 call.

“I think there’s a great deal of pride in it,” says Sunseri. “We have influenced the entire world.”

But bringing that first call to Alabama meant the little guy sneaking across the finish line.

In the 1960s, a federal commission on crime recommended telephone companies develop a single phone number to call for emergencies. A couple of countries had already created three-digit systems like this.

“AT&T actually responded to the report and they came out with the designation of the three numbers to use would-be 9-1-1,” says Mary Boyd, a former president of the National Emergency Number Association.

The president of the Alabama Telephone Company, Bob Gallagher, read about the decision and was upset independent carriers were left out of the conversation. So he had an idea. He took it to the company’s owner, as he explained to NPR in 2008.

Gallagher knew he had to act fast to pull it off. The company picked Haleyville because they were already working there so it was easy to install the system. It took less than a week.

Then on February 16, 1968, the red phone rang for the first time. It was a ceremonial 9-1-1 call between Alabama Congressman Tom Bevill and Alabama House Speaker Rankin Fite. But Mary Boyd says it represents something huge. Before 9-1-1, people with emergencies sometimes had to call multiple numbers until they found the right one.

“So if you’re having a heart attack, that’s not what you want,” says Boyd. “Haleyville … set the course for other communities to see it could be done.”

Ronnie Wilson is a retired 9-1-1 dispatcher.

Ronnie Wilson answered the phone at Haleyville 9-1-1 dispatch for almost 20 years. Wilson remembers one call when a woman’s baby was choking and turning blue.

“I told her to place the baby in your lap upside down. With two fingers mash in the small of their back. And press them gently, up and down,” says Wilson.

A moment later he heard the baby cry.

“I knew then that we was home free,” Wilson says. “And then she just grabbed the phone, says ‘Oh, I love you!’ and hung up.”

Wilson says calls like that are very rewarding. But there were other cases when he knew immediately he’d have to call the coroner. It’s the nature of the business, he says.

The red phone that took the first 9-1-1 call is on tour to Washington, DC for a celebration marking the anniversary. But it’ll be back in Haleyville for the town’s annual 9-1-1 festival in June.