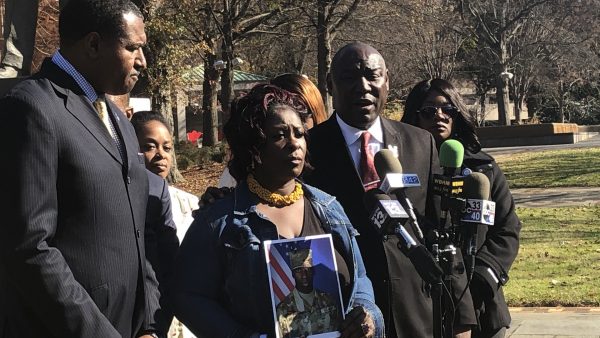 April Pipkins, mother of Emantic Bradford Jr., holds a photo of her son during a press conference on Dec. 17 in Kelly Ingram Park. Bradford was shot by a Hoover police officer in the Galleria on Thanksgiving.

The lawyer for the family of Emantic “EJ” Bradford Jr. says State Attorney General Steve Marshall did not follow the normal process when he took over the fatal shooting case from Jefferson County District Attorney Danny Carr.

A Hoover police officer shot and killed Bradford Thanksgiving night, following a shooting at the mall that left two people wounded. Bradford was initially identified as the shooter, but Hoover officials later retracted their story.

In a press conference this morning, lawyer Ben Crump said Carr should be allowed to do what voters elected him to do in November.

“He’s barely been on the job,” Crump said.  “To take this away from him now is sending a message to the citizens of Jefferson County.”

It’s standard practice for the State Bureau of Investigation to be involved in police shootings, but according to published reports the Attorney General’s office has not taken over in other recent officer-involved shootings.  Marshall could not be reached for comment.

Crump also renewed his call for the release of all video of the incident, saying “the straightest path to justice would be to release all the video so everybody could see for themselves what happened at the Riverchase Galleria Mall on Thanksgiving night.”

Authorities say they can’t release video because of the active investigation.