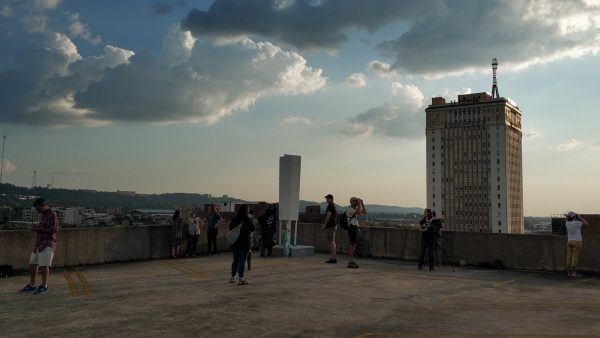 Chimney swifts are a common sight in Birmingham. You might notice large numbers of them as they funnel into chimneys. Many people mistake them for bats. But as new development replaces old buildings and their chimneys, the chimney swift population is at risk. Birmingham Audubon is working to reverse the decline by constructing “swift towers” throughout the city.

Just before sunset on a recent Saturday, hundreds of birds fly in a circle, rotating above a chimney in downtown Birmingham. From down below, it looks like a swarm of little grey torpedoes. They are chimney swifts and tonight, people of all ages have gathered to watch them. Like 8-year-old Quenton Riddle of Homewood.“The chimney swifts are going into the chimney and they’re circling around, kind of looks like a tornado,” says Riddle. “I mean, it’s awesome.”

What Riddle is describing is known as a “swiftnado,” when large groups of chimney swifts rotate together like a tornado and then funnel down into a chimney for the night. Ansel Payne is the executive director of Birmingham Audubon.“So if we were to go and look down inside one of these chimneys when this “swiftnado” goes inside, we would see hundreds to thousands of these birds side-by-side just cuddled up with one another,” says Payne. “We think it probably helps them to stay warm whenever the fall comes along. It may also help them stay safe from predators.”

Chimney swifts have cigar-shaped bodies and their legs cannot support their body weight.

Payne says we do not know a lot about chimney swifts, partly because they fly all day and never touch the ground, so they are hard to track. We know they are migratory, splitting time between eastern North America and South America. They come to Alabama in the spring. Early in the breeding season, it is one couple, one chimney. Around mid-summer, they start to form “swiftnados” and roost together. Payne says the behavior may be peculiar, but it is not new. What did they do before chimneys? “What we think happened is this: these birds evolved in really old growth forests with huge trees, beach trees that were hollowed-out and dead that could basically accommodate thousands of birds,” he says. “But as deforestation proceeded through the 19thcentury, that interestingly correlated with the rise of chimneys in eastern North America, so those birds switched from forest habitat to urban habitat.”

The problem now is that as cities revitalize, developers tear down old buildings, along with their old chimneys. Greg Harber of Birmingham Audubon has been watching “swiftnados” around the city for the past 10 years and has seen the change. “Sadly we have lost a couple of different buildings because of the redevelopment in the downtown area,” Harber says. “And these were roost sites that would hold 500 to 600 birds each night.”

It adds up. Nationwide over the past 50 years, the chimney swift population has declined by more than 70 percent. Birmingham Audubon is working to replace lost habitat with chimney swift towers. “We’re producing artificial chimneys,” executive director Ansel Payne says. “They look a lot like chimneys. They are structurally chimneys, but they don’t serve any purpose except to give breeding locations for these birds.”

Each tower costs around $1000. So far, there are four of them at places like Jones Valley Teaching Farm downtown and atop the McWane Science Center parking deck. Audubon is raising money to build at least 30 towers over the next three years. In the meantime, the group wants more people to look up and experience the “swiftnado” phenomenon.

More than 100 people crowd together to watch a “swiftnado” in downtown Birmingham.

Ryan Massey of Center Point did not plan on attending this viewing of the chimney swifts. He just happened to stop by on his way home from picking up dinner. “Unless you see all these people standing out here,” he says, “you would never know this was happening in Birmingham.”

More than 100 people pile onto the sidewalk. As the swifts pick up speed and rotate closer together, the crowd stirs with excitement. Then the birds fall into the chimney. Ansel Payne has seen it many times before, but he says it never gets old. He points out the swifts entering the chimney. “There they are, couple more, couple more, stragglers here,” Payne says. “And look how perfectly this is timed, just as the light disappears is when the last ones go in.”

It is migration season for chimney swifts. That means by the end of the month, they will be gone from Alabama. They’ll winter in the South American Amazon. The hope is when the birds return next spring, breeding couples will find a few new places to call home.