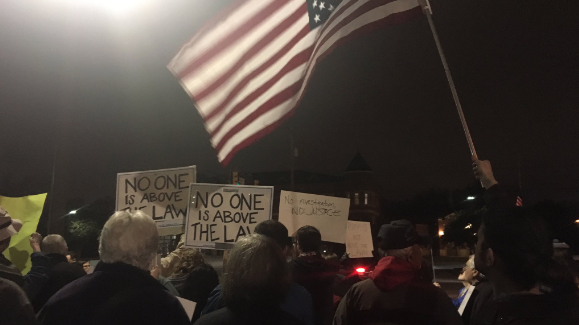 The group was chanting “hands off of special council" while holding signs that read “Protect Mueller” and “Whitaker must recuse himself.”

Michelle Woods says this is the first protest she’s ever attended. She says she couldn’t sit around anymore without saying something.

“If this was a president that we had in office in 2016 and in 2014 and you know who I’m talking about … he would have been gone,” she says. “I just can’t understand how everybody is just sitting back and letting this injustice run amuck.”

David Odom is part of the group that helped organize the protest and says he’s not a huge fan of Sessions.

“But he did the right thing on recusing himself because he had been a campaign aide and under scrutiny himself. So, Matt Whitaker needs to do that right thing and step out of it — say publicly that he will stay out of the investigation,” Odom says.

While opinions on Sessions are mixed, a poll from CNBC in August showed 64 percent of Americans believe Trump should not fire Sessions. In the last two days Alabama Senator Richard Shelby and former Alabama Attorney General Luther Strange both expressed support. Strange tweeted “Sessions for Senate in 2020,” but it’s not clear whether Sessions will make another run.

Thank you to my good friend, Jeff Sessions, for over 40 yrs of noble service to Alabama & our country. Jeff was a respected colleague of mine in the Senate for two decades & represented our nation with honor as US Attorney General. I wish him all the best in his future endeavors. — Richard Shelby (@SenShelby) November 7, 2018