A New Play Explores Race Through A 1951 Birmingham Basketball Court 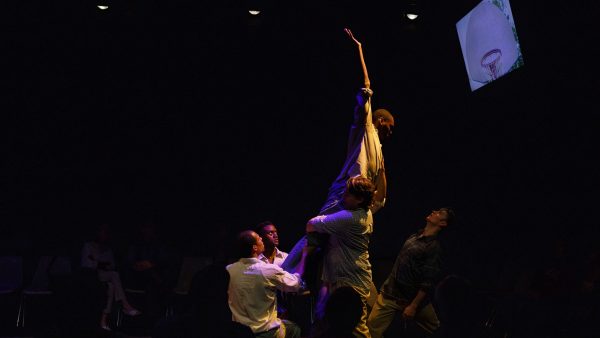 When Seth Panitch visited the Birmingham Civil Rights Institute, he was struck by a legal code book that listed rules of segregation.

“What stood out to me was this one sequence when they talked about [black and white] kids, children, and how they couldn’t play games together,” says Panitch. “They were so specific.”

Panitch says in the case of basketball, it was too costly for Alabama to build separate basketball courts. So authorities would assign certain times that blacks and whites could use the courts.

Panitch, who is the head of the University of Alabama’s acting programs, had a thought. What if black and white teens stumbled onto each other on the court? And could that be a prism through which to discuss race?

That was the spark for the new play “Separate and Equal.” Panitch wrote and directed the play which premiered this month off-Broadway in New York. The play centers on a hypothetical basketball game between three white and three black teens in 1951 Birmingham — a game that would have been illegal.

Panitch used the Birmingham Civil Rights Institute’s oral history collection to inform his work. He says reading transcripts he noted how parents trained their children to fall into their expected roles under segregation.

“One of the main themes of the play is how we keep expecting the youth to sort our problems out. But the problem is that we’ve trained them so intently on our own failures that it’s difficult to see any other possibility in the future,” says Panitch.

In the theater, the audience surrounds the stage as if they were watching a real basketball game.

“They might get sweated on cause they’re pretty close to the action,” says Panitch.

The actors’ movements are choreographed, a combination of basketball and modern dance, and set to an original score that transitions from rock and to jazz. Panitch says he considered staging a real basketball game but it was problematic. A misthrown ball could go into the audience. He also couldn’t control the score which is a key plot point.

“When you stylize something it really frees up the audience’s imagination for them to read the play in perhaps a different way than they would if it was literal,” says Panitch.

“Separate and Equal” runs in New York through September 30th, but it had a short preview in Tuscaloosa in August. Panitch says audiences in both cities would linger and discuss the show. In Alabama, the history was very real.

“Many of the older people in my audience in Alabama would come up and talk to me afterwards and say ‘That was my uncle.’ Or ‘that was my grandfather’ or ‘I see my family in that,’” says Panitch.

He says the New York audience may have had more distance from the history, but they are more polarized.

“In some respects, they do feel that it’s factual to them as a modern expression of race,” says Panitch.

He says there are no plans to bring the play to Birmingham, where it is set, but he hopes it will happen.

“I think that would be very important to do it where it was researched…and near so many of those milestones in the struggle,” says Panitch.