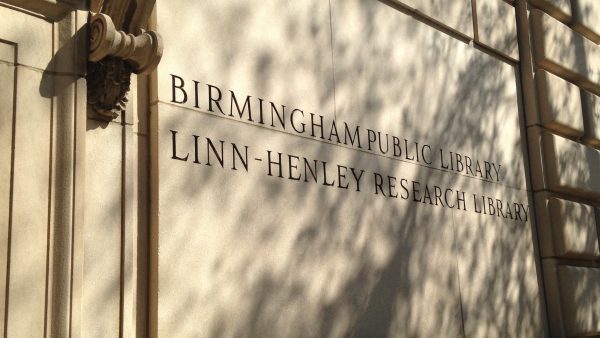 Think of the flashpoints from the civil rights movement, and buses or lunch counters or voting booths come to mind. One area that’s received less attention is public libraries.

In April 1963, the same spring as the Birmingham Children’s Marches, army veteran and student Shelly Millender walked into the main Birmingham library. Only whites were allowed inside. Millender, who is black, was the spokesman for a group of Miles College students attempting a “read-in” at the downtown branch.

“If I could put my life on the line for the country, certainly I shouldn’t be barred from the library,” says Millender.

Once inside, the group was told they had to go to a colored branch. So they sat down. But instead of a confrontation, the students were left alone.

“I was surprised that I didn’t get the rejection that I anticipated,” says Millender.

The group returned a few days later, but again, no clash with authorities. That’s because the library was segregated by custom and not by law, according to Wayne Wiegand, the author of a book about integrating Southern libraries. He says within days the library board met to figure out what to do.

“The board decided, well, we don’t want the library to be a site for public demonstrations, but let’s just open up the library to all races,” says Wiegand. “And that’s exactly what they did.”

Wiegand says this bit of civil rights history is often forgotten because it was mostly driven by students who needed library. The media tended to follow major civil rights figures who, for the most part, weren’t involved in “read-ins.” Library integrations were peaceful, without bombings and dogs and fire hoses.

Shelly Millender says the library integration was well-earned, but he doesn’t call it a victory.

“I felt like I was entitled to it anyway, so I didn’t think they were doing me any great favor,” says Millender.

He says it was absurd to be banned for his skin color in the first place.

Wayne Wiegand will speak about his book “The Desegregation of Public Libraries in the Jim Crow South: Civil Rights and Local Activism” Tuesday evening at Birmingham’s Central Library.

The Birmingham Public Library is a program sponsor of WBHM. The news and business departments operate separately.