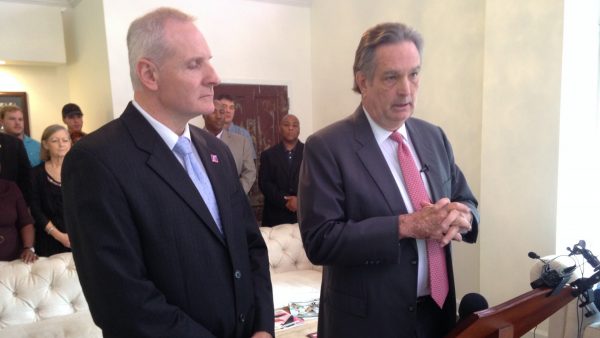 “I’m standing here today and I’m telling you I didn’t do it,” Henderson said at a press conference Tuesday. “I look forward to that day in court and I hope that day comes soon.”

Jim Parkman, an attorney for Henderson, suggested at the press conference the charge is politically motivated.

“I think it is strange, the timing of this indictment came just moments, minutes before an active workday that Todd Henderson was to step into office,” Parkman said.

Henderson was to take office as district attorney Tuesday. Instead, he was suspended in accordance with state law following the felony indictment. A Jefferson County judge appointed Danny Carr interim district attorney over the weekend.

Parkman acknowledged Henderson had a romantic relationship with the woman, but said it didn’t start until after he was removed from the case.

Parkman said on Tuesday he still doesn’t know the specifics of the charge.

“The indictment doesn’t tell us what question was asked that he responded to that he lied about,” Parkman said. “But I can tell you that in reading it, you know, we have looked at it, we don’t believe there’s a single word.”

Henderson is a Democrat. Republican Attorney General Luther Strange’s office says it investigated Henderson based on information it received from the Alabama State Bar in December.