Musician James Mullis: An Old Soul with a Millennial’s Heart 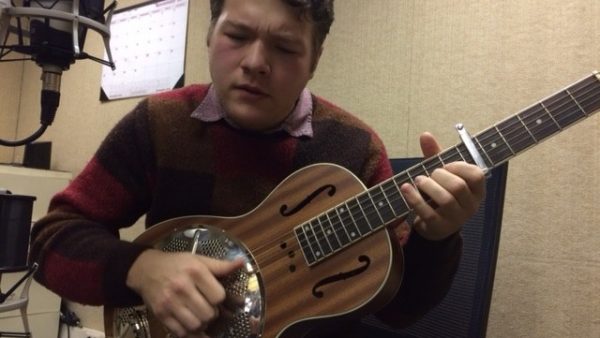 Musician James Mullis plays original songs on his steel guitar. He says he manages his stage fright by singing with his eyes closed and pretending he's in his bedroom.

Below is an extended interview with James Mullis featuring music.

If there’s one thing musician James Mullis enjoys, it’s a challenge. The 23-year-old from Troy, Alabama, moved to Birmingham about three years ago to pursue his dream of playing music. Since then, Mullis has crafted a unique blend of blues, folk, and Americana; a sound almost foreign to musicians from his generation. A self-described introvert, Mullis says his musical journey began in that most millennial of ways.

James Mullis: We were playing this game Rock Band in like middle school and there’s the singing portion. We had never done that part. There was the guitar and there was the drums, and then there was the singing and everyone was always afraid to do that and I was like, “Why is this embarrassing that I can just go and honestly try to sing?” And my friend at the time, he was like, “Well neither of us can sing so we’ll just skip that one.” I didn’t like that. It was like a challenge. I remember I asked for a guitar around that time and didn’t realize I would stick with it. But over the next couple of years, I wanted to play shows and it presented itself as a challenge. And I, for some reason,  took it on. I don’t know why but it it’s worked out so far.

Esther: You took on the challenge of singing and playing music in front of people?

Mullis: And it didn’t come easy. In the middle of the summer I remember I would have cold hands and feet as if it was 30 degrees outside.

Esther: Was that nerves?

Mullis: I guess it can present itself in that way.

Esther: How did you overcome that?

Mullis:  Closing my eyes. I mean, I guess that old saying, “Just close your eyes and pretend you’re in your bedroom.”

Mullis’ guitar playing was influenced by Chet Atkins. He was capable of playing the baseline, the melody and the rhythm simultaneously. Mullis says his vocal influences were blues singer Howlin’ Wolf and Tom Waits.

Esther: Who are some of your influences and how did you come to be influenced by those people?

Mullis: Well I always thought of myself as more of a guitar player than a vocalist and really was just blown away the first time I heard Chet Atkins. He was capable of playing the baseline, the melody and the rhythm part simultaneously. I just, I was always playing by myself. I didn’t start playing in the band until recently, so I just threw myself at it and eventually figured out that picking pattern. Vocally it was always easier for me to sing from my diaphragm instead of like my throat. It’s just easier to be raspy rather than clear. Howling Wolf, a lot of old blues players, seems so natural to them and they didn’t think about it. So, I figured I wouldn’t think about it and just sing comfortably. Whatever doesn’t hurt.

A lot of people think it’s strange someone my age is playing this music. And I never set out to have an antiquated sound, but that music resonated with me. It sort of defied having a time period because to me folk music, I think that’s how it’s described: it’s timeless music. It’s always relevant. I just wanted to tap into that. So, to me it didn’t seem like I was playing old music because it was relevant to me. I thought if it was relevant to me it would be relevant to someone else.

Mullis:  It’s awkward for both sides I think. You don’t know what the crowd is going to expect of you and the crowd certainly is in an uncomfortable position if you’re really bad.

Esther: Well when you opened your mouth to sing the first thought that went through my mind was, “Now we know what happened to the soul of Hank Williams when he died.”

Esther: And when I told you that you told me a really interesting story about the first video you ever YouTubed.

Mullis: Yeah that was, I don’t know what I searched or I don’t know how I got to it. That’s my first memory of YouTube is listening to “Your Cheatin’ Heart” by Hank Williams Sr. I remember the way the music struck me. I think everyone when they hear a certain genre or style of music it takes them somewhere and they associate it with geography maybe or culture and to me I heard “Your Cheatin’ Heart” and I thought of Hawaii. I thought that it sounded like it came from an island. It was just so interesting to me. I think Bob Dylan said those old country records sound like they’re coming from the most interesting place in the world. And that’s how it felt to me as a kid.