Endangered Whooping Cranes Are Coming Back 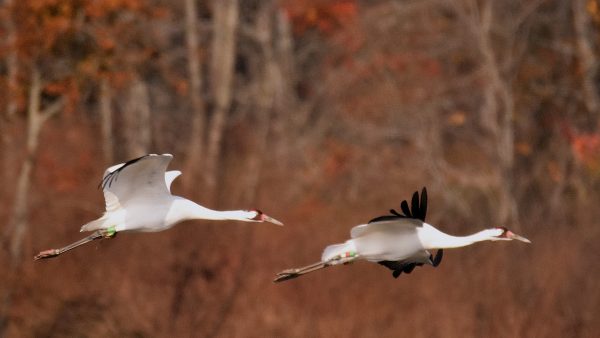 A couple extra wild birds in a creek doesn’t seem too important … until you realize that not long ago, there were barely 20 of them in the world. Whooping cranes are the tallest bird in America and they can live into their thirties, but that didn’t keep them from near-extinction. Now, though, thanks to decades of cooperation, they’re making a comeback. And you can see it — and definitely hear it — in Alabama.

Dozens of birdwatchers walk along a path near a marshy creek in Wheeler National Wildlife Refuge in Decatur. There are signs saying “quiet please,” but hundreds of cranes mock that plea with raucous cries.

Most of the symphony comes from sandhill cranes. But dotting the brown flock are a few endangered whooping cranes. Compared to the sandhill cranes, they’re fewer but bigger and brighter.

Amber Wilson of the International Crane Foundation says, “You’ll definitely be able to spot out the whooping cranes because they are about my height. They’re huge. They could look me in the eye, five feet tall. They have black on their wing tips. They’re bright white birds, and they also have that red patch on their heads.”

Wilson’s organization has been breeding whooping cranes since the 1970s. And this past summer in Wisconsin, a small wild flock the foundation helped start produced two new chicks. One is already at Wheeler. Two more wild whooping cranes might not sound like a lot, but, “two is very significant because to my knowledge, this is the first time that this has actually happened in this population. So these birds are going to grow up and they’re going to have amazing genetics, and they’re going to start having more chicks,” Wilson says. “We’re really happy about it.”

That’s partly because these birds had all but disappeared due to hunting and habitat destruction. In the 1940s there were barely 20 left in the wild. But people began trying to save them through captive breeding, land preservation, and rearing chicks with hand puppets. Biologists even taught the birds to migrate between Wisconsin and the Southeast by guiding them with small planes. And it wasn’t the planes the birds were following — it was the pilot wearing a full-body crane suit.

Anna Turkett, a lorikeet specialist at the Birmingham Zoo, understands the devotion.

“The cranes are really important to me because I feel like they’re a national treasure that’s in our backyard,” she says. “They’re such a comeback story and they’re so rare. And in Alabama, we don’t get those large beautiful animals. It’s so great to have them here in a place that’s so close to home.”

Wilson credits cooperation from conservation groups, government agencies, donors, and volunteers. And she credits the birds themselves:

“To have roughly 500 in the wild right now is extraordinary. These birds are actually really tough. They’ve found that some avian diseases that other birds are more susceptible to, cranes are not as susceptible to.”

Lee McElvaine, special for WBHM
A whooping crane about to take off for another spot to find seeds, insects, and other small creatures to eat. Note the bands on its legs.

In recent years, 20 or 30 whooping cranes have wintered in Wheeler. This year, conservationists hope that might rise to 40. If that happens, they say, it’s a good sign not just for the cranes but for the other species in those ecosystems.

Dan Carsen, WBHM
If you walk back from the observation house but want to snag one more look at the cranes from the visitor center before you leave Wheeler, it’ll likely look something like this. There are telescopes mounted throughout both buildings.