Brothers Basketballing into their 80s at Senior Games 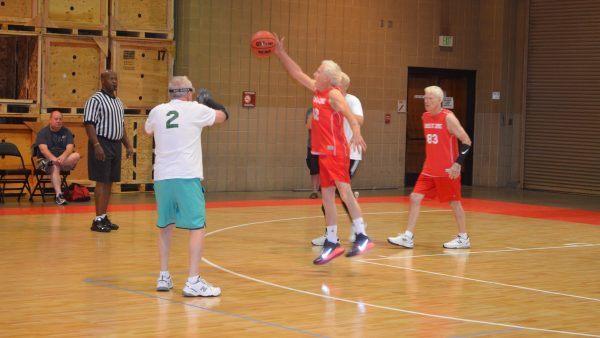 Dan Twomey, 80, leaps to breakup a pass during a basketball game in the 80 and above bracket of the Senior Games in Birmingham, Alabama, on Wednesday, June 7, 2017.

The Cleveland Cavaliers and the Golden State Warriors are battling for the NBA Championship with guys mostly in their 20s and 30s. But the Twomey brothers are in their 80s. They’re among the more than 10,000 athletes in Birmingham competing for gold in the Senior Games.

Forget about the white hair. The three Twomey brothers are basketballers. Their team, Pass It 2-Me, is one of 16 in the 80-and-over bracket.

In their first game against the Pitt Bulls, John Twomey dribbled toward the basket, spotted his brother Dan near three-point range and dished off a quick assist.

Pass It 2-Me defeated the Pitt Bulls 38 to 19 on Wednesday. Despite the win, they knew they needed to improve.

“I’m a starter. I missed a lot of easy layups,” says John Twomey.

At 83, he’s the oldest brother and the unofficial team coach. In the coming days, the number of games increases and so does the competition.

“We’ve got a team coming in here that’s going to be playing in our age group with a guy that’s six-eight and another guy at six-nine,” John Twomey says.  “We’re going to beat ’em, but it’s going to be a chore.”

John is the tallest and he has a running hook shot to prove it. Tom Twomey is usually the best shooter. And his twin Dan Twomey is the speedster.

From left, Tom, Dan and John Twomey take a break from the action during their first basketball game against the Pitt Bulls. Their team, Pass It 2-Me, went on to win with a score of 38 to 19.

That speed was on display in that first game. When Tom missed a layup, Dan hustled across the court, grabbed the rebound and laid it in.

The brothers began playing together as kids about 70 years ago. This was the second time all three competed together in the Senior Games.

But the brothers say they don’t have to play together all the time to maintain chemistry on the court. It all jelled back on the farm in upstate New York.

Back then, things were simple, Dan Twomey says.

“All we had at first was a bushel basket nailed to the barn. And we would play there in the wintertime as well as the summertime,” he says. “It was wet or ice.“

The Twomeys’ parents were Irish immigrants who ran a dairy farm. The brothers and their sister, Hannah, were always busy with chores, but their parents encouraged active sports.

The Twomeys say that focus on physical fitness sticks with them today. In Birmingham, the games last 30 minutes and sometimes they play three times a day. For Tom Twomey, that’s not a problem.

“I play four times a week, an hour and a half, full court with younger people,” Tom Twomey says.

And for John Twomey, who plays regularly even after triple bypass surgery last year, basketball is therapy.

The Twomey’s team racked up five wins before getting eliminated Friday in their third game of the day. They’re not taking home the gold, but they say they’ll keep on playing.

The Senior Games continue in Birmingham through Thursday with events at several venues including the BJCC, the CrossPlex and UAB.